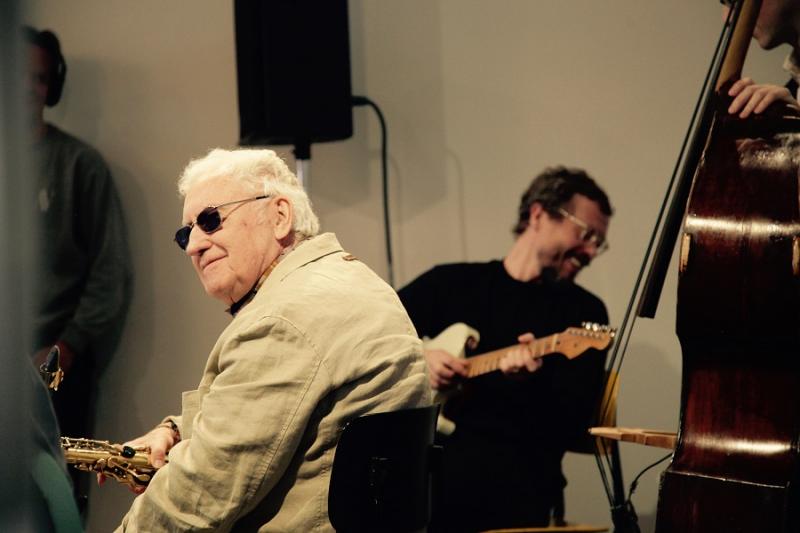 "I've been waiting for this moment for a long time," said guitarist Jakob Bro to the small, tightly packed audience at Mengi, a vibrant new arts space in downtown Reykjavik. This tour—which besides Iceland also made stops in Denmark, the Faroe Islands, Norway and Greenland—had been some time in coming, for all concerned.

It's been almost seven years since Bro, Lee Konitz and Bill Frisell recorded Balladeering (Loveland Records, 2009) alongside Paul Motian and Ben Street. This core trio has since gone on to record twice more, with Thomas Morgan replacing Street, while the drum stool remained vacant following the death of Motian in 2011. Not until now, however, has the quartet hit the road. About time you might say.

The seeds for this tour were planted when the trilogy of Balladeering, Time (Loveland Records, 2011) and December Song (Loveland Records, 2013) was nominated for the Nordic Council Music Prize 2014, a prestigious pan-Scandinavian award that has recognized outstanding artistic merit since 1965. It was the impetus Bro needed to harness this quartet and tour it in the very places that had inspired the music in the first place.

Konitz' alto introduced the haunting "Vraa," buoyed by Morgan's earthy bass and Bro and Frisell's gently sparkling articulations. The eighty seven year-old saxophonist—who's been balladeering since the 1940s—caressed the melody tenderly, alternating lead with Bro. Frisell stirred restlessly, echoing Morgan's probing bass lines, embellishing here and there with deft harmonics and peeling melodic phrases. Morgan then stepped to the fore, with the two guitarists' shimmering eddies overlapping. Towards the end Konitz picked up the dying melody, not with his horn, but with breathy, unselfconscious whistling.

Prior to the next song Konitz held up the score: "This song has four bars and two chords," he remarked. "What can you expect from that?" To the packed house at Mengi, the answer was obvious -a little more magic, perhaps. The sunny "Evening Song" duly followed, with Konitz switching between singing alto and improvised scat over a softly bouncing bass and airy unison guitar melodies.

"Giant" was dedicated to the late Paul Motian. Konitz, once again on wordless vocals, led the way on this sombre yet uplifting lament, his voice growing through his alto. Bass and guitars dovetailed briefly at the tail end of this lean yet emotionally weighted number.

If Motion was the original catalyst for this band then his presence was somehow felt in Bro's sketch-like compositions, both melodically and in the collective sense of playful freedom. Frisell presented the pastoral melody of "Zygaena," a looser group improvisation that featured Konitz' weaving alto at the epicentre of ideas ricocheting between the quartet members. Frisell and Bro batted a tenacious motif back and forth, which briefly lured Konitz as the song gradually petered out.

Composed and improvised lines were closely spun on the achingly pretty "Laxness"; Konitz, Frisell and Morgan relayed gently meandering solos that kept the kernel of the melody aglow.

Greater rhythmic currents flowed through "Cirklar," though once more it was Konitz' melodicism on alto and wordless vocals that formed the spine of the tune, as guitars and bass floated in each other's orbits. By contrast, the three string players stepped in closer unison on the lyrical "Vinterhymne" as Konitz' carved a delightfully mellifluous, unhurried path.

Following warm applause, the four musicans encored with "Thinging," Konitz' take on the Jerome Kern/Oscar Hammerstein tune "All the Things You Are." Over a walking bass line, Konitz and Bro shared protagonism, with Frisell—a master of less is more---largely sitting out, seemingly happy just to listen. Who could blame him? Konitz has been playing the standards for a lifetime and his solo exuded a warmth that can only come from a life-long love affair.

It may be that this quartet tour is a one-off. Given the four musicians' busy individual touring schedules and Konitz' age, further opportunities will likely be limited. Therefore, it was an unexpected bonus to learn that the internationally renowned Danish poet/film-maker Jørgen Leth was traveling with the quartet to shoot a documentary, scheduled for release in 2016. It would make a fitting tribute to—and an important document of—a quite special musical encounter.