By Thomas Carroll
April 1, 2012
Sign in to view read count 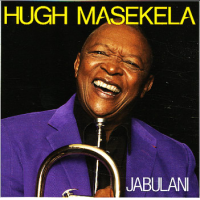 At the age of 72, South African vocalist and multi-instrumentalist Hugh Masekela is still making music with as much energy and passion as he did in the days of "Grazin' in the Grass" at the height of his international fame in the 1960s and 1970s. Historically, Masekela has used his music as a form of social and political activism to combat issues like Apartheid. Jabulani strays from this trend of defiance and instead focuses on the joys and drawbacks of marriage, a highly ritualized and ceremonial institution in the South African village where Masekela was born.

Masekela surrounds himself with a rhythm section comprised of prominent South African rock and jazz musicians, and a backing choir, to help him recreate wedding songs he remembers from his childhood. The album's acoustically dry production and pop-oriented song forms give it a very accessible sound. Elements of gospel, funk, smooth jazz and rock are constantly present throughout Jabulani, but a Mbaqanga feel dominates the record.

Singing mostly in his native Xhosa language, Masekela tells stories of both happiness and sadness due to marriage, but the latter is undetectable in the tone of the music. Don Laka's arrangements place emphasis on Masekela's commanding tenor and the rich harmonies of the medium-sized choir. These combined forces transform this 11 track album into a roughly hour-long joyous celebration with some help from the generally brisk and harmonically major grooves laid down by the rhythm section. The bandleader's vocal energy becomes almost fierce on songs like "Bambezela," a masterpiece in emotional momentum building, but he never loses his playful tone. With both his voice and flugelhorn, Masekela interacts with the choir both by regally weaving melodic lines through the open spaces in its harmony and engaging it in numerous repetitive lines of call-and-response. The vocal might of this record is strongest during the a cappella outro of "Tsoang Tsoang," when Masekela belts his heart out over astonishingly firm bass harmonies.

Masekela's flugelhorn solos are simple but crucial in the development of the melodic ideas in individual songs. He usually begins with a slight variation of the main theme, branches out sometimes to the point of harmonic obscurity, and finally returns to the main melody with fervor in order to set up a triumphant finish for the band. One of the disappointing aspects of the album is its lack of solos by band members, with a Latin-tinged piano solo on "Scatter My Dada" the only true extended display of instrumental virtuosity from a band member other than Masekela on the record.

As a whole, Jabulani provides more of a snapshot of South African culture than a body of instrumental ingenuity. While the musical performance is never less than refined and professional, the message and mood of the album are clearly more important than the instrumental performance.