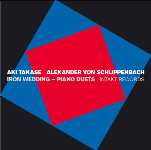 If there was ever anything predictable about these two pianists coming together on record, the results are anything but. Alexander von Schlippenbach is the senior figure by some decades, but this is still such a meeting of minds that the difference of time pales into insignificance. This is their first meeting on record in fifteen years. Time passing has honed their dialectic, rendering it the product of evolving sensibilities.

That's clear enough on the ten minutes of "Suite In Five Parts." The duo seems to dance around each other before settling by mutual and slowly agreed consent on a mood of contemplative unease. Every note is played serving to ensure a state of enticement, to keep the listening closely for things to evolve, even though the prospect of resolution is something perpetually and constructively deferred.

The mood, something antithetical to music that is anything but a music of mood, is on "Twelve Tone Tales" again one of unease, although this time the processes of deep thinking are closer to the music's surface, serving as indicators of dialogue in a perpetual state of flux.

The brief "Eight" gets as close as anything here to Cecil Taylor's hyperactivity, although the contours of the music are inevitably and entirely of the duo's own making. Lennie Tristano comes into the reckoning too with the deployment of long lines strung out for the soundest and most trenchantly resounding of musical reasons.

Neither player is credited with the celeste, but it's that instrument that turns up beneath one pair of hands on "Zankapfel." It adds a whole different color to proceedings which have even less truck with resolution. The music seems to take on an unassuming force of its own, turning the two players into mere servants even while they consciously avoid both bombast and every empty gesture that goes with it.

The title track is almost a repeat performance in terms of the dynamics of the music, but of course the very notion of repetition to musicians like these, is another take on anathema. Even in such circumstances the music is again given the time to breathe and the exchanges between the two are seamless.

"Passacaglia 1, 2, 3" is perhaps as close to conventional in its development as anything here. Underplaying is the mutually agreed order of the day and the slightly faltering progress of the music sounds as much like a homage to Claude Debussy as it does to Thelonious Monk.

Visit Aki Takase and Alexander von Schlippenbach on the web.