By JOHN KELMAN
September 10, 2013
Sign in to view read count 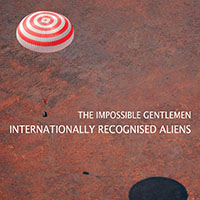 When you come out of the gate as strongly as The Impossible Gentlemen (Basho, 2011), you create a pretty high set of expectations for the follow-up. Of course, when it's a quartet of musicians this accomplished—a transatlantic, trans-generational group consisting of a living legend (bassist Steve Swallow), a less-known but equally active American cohort (drummer Adam Nussbaum), a rising British star (pianist Gwilym Simcock and fellow Brit deserving far greater recognition (guitarist Mike Walker—there's an intrinsic recipe for a sophomore effort that can (and does) easily transcends their superlative debut. Add to that—based on the self-penned liner notes and photos—a group of players that don't just get along, but whose collective chemistry is clearly as much about joy and fun as it is serious music-making, and it means Internationally Recognisable Aliens is a record that, like its predecessor, is destined for year-end "best of" lists.

Bumping into Simcock in Montreal this past summer, he described The Impossible Gentlemen as "music written for what we hoped the group would be" while, with more touring under its belt, Internationally Recognised Aliens was "for what we know the group can be." On the road, the Impossible Gentlemen's members also discovered that they got along like gangbusters, and their joie du vivre is all over this record, from the unexpectedly gritty opener, "Heute Loiter"—its John Scofield-esque funk less than a total surprise, perhaps, given Swallow and Nussbaum's history with the guitarist on early 1980s albums like Shinola (Enja, 1982)—to the buoyant, Keith Jarrett-tinged "Modern Day Heroes" which, also co-composed by Simcock and Walker, grooves along amiably despite a tough set of changes and knotty yet singable melody that lead into a fiery trade-off between the clean-toned Walker and similarly irrepressible Simcock.

Internationally Recognised Aliens also ups the ante by recruiting producer Steve Rodby. A longtime member of the seemingly forever-on-hiatus Pat Metheny Group, In addition to being a fine bassist, Rodby has proven himself an astute producer on recordings by Eliane Elias, the late Michael Brecker and Metheny himself, as recently as The Orchestrion Project (Nonesuch, 2013). Here, in addition to helping bring the Impossible Gentlemen's effervescent personality to greater life, Rodby contributes some acoustic bass to Simcock's gentle, Latinesque "Just to See You," and "Barber Blues," an extended 16-bar blues also imbued by the spirit of Samuel Barber and a reminder that, not much more than a decade ago, the 32 year-old pianist was immersed in classical studies and had yet to make the leap over to the dark side.

Throughout, Swallow and Nussbaum provide the kind of support of which many bands dream, the bassist's five-string instrument allowing him, at times, to cross paths with the low end of Walker's guitar, as he does on his closing "Ever After," its piano/guitar intro ultimately assuming greater shape when bass and drums enter. It's a gentle ending to Internationally Recognisable Aliens, an even more exceptional record than the Impossible Gentlemen's debut, and evidence of the power and value of evolving friendships—musical and otherwise—that unequivocally influence how a group lives and, consequently, plays together.

Heute Loiter; Just to See You; Modern Day Heroes; The Sliver of Other Lovers; Crank of Cam Bay; Love in Unlikely Places; Barber Blues; Ever After.