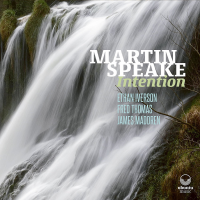 Celebrating his 60th birthday in April 2018, Martin Speake has been a stalwart of the British jazz scene for some forty years, initially playing with the saxophone quartet Itchy Fingers. He is lead alto saxophonist in the redoubtable London Jazz Orchestra and his teaching duties extend to Trinity Laban Conservatoire of Music and Dance and London's Royal Academy of Music. In his review of Speake's album Change Of Heart (ECM, 2006), John Kelman summarised the saxophonist's playing perfectly: "Speake's playing can be as enigmatic as his writing. The lyricism and subtlety of both his written and improvised melodies sometimes unfold so gradually that one needs to take a mental step back to absorb it all."

Speake originally met former The Bad Plus pianist Ethan Iverson in 1990 at the Banff Centre For The Arts in Canada where they studied for a month with Steve Coleman, Kevin Eubanks, Stanley Cowell and Kenny Wheeler amongst others. The two subsequently recorded a duet album of standards, My Ideal (Basho Records, 2004). Speake is one of the UK's finest, if undersung, saxophonists, and, with nine of the eleven tracks on the album attributed to him, he's a talented composer too.

The sumptuous ballad "Becky," opens Intention, with Iverson stating the memorable head and Speake's pure bluesy alto declaiming its confident message during the latter half of the track. But with the jaunty "Twister" the mood changes dramatically and again on "Magic Show," its Ornette Coleman-like melody imparting a distinctive contrapuntal element before launching into freer territory. "Spring Dance" is a joyous celebration with Speake's wailing bluesiness dominant. Of the two non-originals on the album, Speake's interpretation of the Dietz and Schwartz classic "Dancing In The Dark" recalls Kelman's description of "lyricism and subtlety," By contrast, "Charlie's Wig" is a fast-paced reinterpretation of the Parker number. "Hidden Vision" exudes a sprightly Loose Tubes-ish melody, with Speake's alto bouncing around the choruses, nimbly pursued by Iverson. The title track closer is a wistful folky number where once again, Speake's penchant for subtle understatement is brought into relief. His ability to alternate light and shade with every track is key to this impressively seductive album.