By Glenn Astarita
December 15, 2018
Sign in to view read count 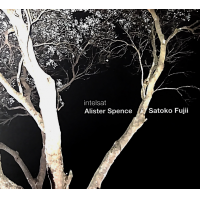 This is the ninth of twelve CDs celebrating leading-edge pianist, composer Satoko Fujii's 60th birthday. On this album Fujii and Australian keyboardist Alistir Spence (Barre Phillip, Myra Melford) perform a series of over-the-top duets in front of a live audience in 2017 at the Intelstat jazz venue in Kiracho, Nishio, Japan. The artists first met when Fuji and trumpeter Natsuki Tamura toured Australia in 2007, leading to subsequent collaborations.

The duo's charismatic alliance is teeming with unbridled resourcefulness. Sure, the anticipated alien soundscapes are intact, but this is not classic (old school) ambient-electronica. With her prepared piano, Fujii often strums the piano strings or taps on the piano body in addition to her work on the eighty-eights. The ethereal inventions project a diverse tonal range, but more importantly, the duo's intuitive interplay leads the willing listener on a splintered phantasmagorical journey, embedded with prismatic colors.

Spence seemingly incorporates midi variants and occasionally signals an opaque demarcation between acoustic and electric instruments. On "Narvi" Fujii is patting on the piano strings, and to some extent, it seems like live electronics are being used, although this may not be the case. However, the duo executes faint, inconspicuous melodies that arise and dissipate via some mimicking between piano and synths lines. It's a polytonal feast, as the musicians tread irregular musical turf, including cyclical motifs, uncanny EFX-tinged episodes and a host of compelling oddities.

"Telesto" is a fascinating jaunt due to the pianist's simple block chords separated by rest stops and airy developments in concert with more strings strumming and asymmetrical rhythmic hits. But Spence amps it up via his electric keyboard improv, softened with a few fleeting stabs at humor and bracing contrasts. Whereas, "Dione" is formulated with disparate noises, patterns and soundscapes that pose a sense of containment or happenstance.

The musicians' advancements and interactions are not wanton experiments. It's primarily a different improvisational vehicle to promote a form of cosmic expressionism and multihued sketches. Maybe they're splitting molecules, disrupting the outward movement of sound waves, generating aural illusions or just having some fun by using their wits and eminent improvisational ability. To that end, the fun-factor is sky high.