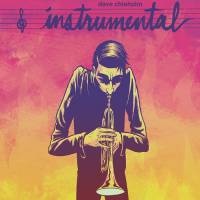 Trumpeter/composer Dave Chisholm has a creative skill outside of music: he's also an accomplished cartoonist. His graphic novel Instrumental tells the story of an aspiring trumpeter who almost loses his soul after receiving a cursed trumpet, and this album serves as the Soundtrack. The seven selections have titles paralleling the chapters in the graphic novel, but they are rarely directly programmatic; it's more a matter of mood. So the comic and the music each can be experienced alone, but there is additional resonance if they are taken together.

On the recording the trumpeter and his quintet are portrayed by guitarist Noah Berman, pianist Mike Conrad, bassist Benjamin Thomas, drummer Aaron Staebell, and of course Chisholm himself on trumpet, voice, and synthesizer. "The Void" opens with tone painting—abstract sounds emerging from nothingness— as an ostinato pattern begins a long slow build, with the trumpet in the lead, displaying a wide range of tones and cries, finally ending unaccompanied, teasing the theme of the next piece. "Celebration" is a fanfare, with the upbeat mood implied by the title. It becomes more contemplative, featuring a piano solo with guitar accompaniment—then explodes into a delirious dance, complete with a catchy tune featuring wordless vocals.

"Decompression" expresses its theme through a slow rhythm. An unusual place for a double-time drum solo, but it works. "Death and the Narrator" is the longest track, and it carries the most dramatic weight. It begins with atmospheric electronics (like "The Void" in the beginning of the album), slowly introducing a funereal "Dies Irae"-like riff. This is another bit of program music, but again it is musically convincing without reference to the background story. "Best of Luck" ends the album on a calm, hopeful note, opening and closing with an expressive trumpet/piano duet.

Chisholm makes a striking impression as trumpeter and composer with Instrumental, aided by a sympathetic band. It's a memorable contemporary jazz album taken by itself, made even more memorable in combination with his graphic novel. I listened to the music before reading the comic, but have to confess that it's now hard to remember the album without reference to the visuals. Once music is associated with pictures—be it a music video, a movie soundtrack, or a graphic novel—it never completely stands alone again. A testament to the power of visual memory.

The Void; Celebration; Costumes; Decompression; Paranoia; Death and the Narrator; Best of Luck.