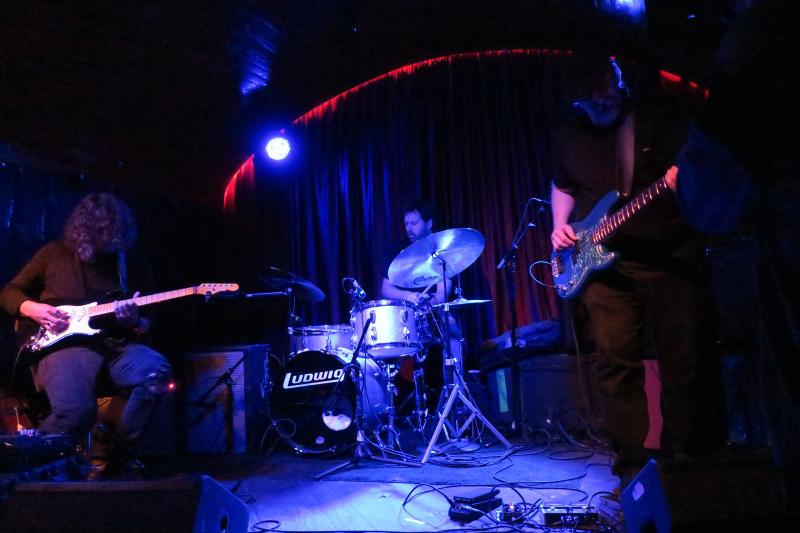 It's unclear what formal apparel has to do with the martial arts, or what either one has to do with live music for that matter, but nevermind. Adventurous musical acts are always welcome at Kung Fu Necktie as much as open-eared listeners are. The wood-paneled corner bar in northeast Philadelphia's Fishtown neighborhood is a cozy space with an inviting local-hangout atmosphere and plenty of character. On this occasion it played host to a sizzling power-trio performance happy to find the border between hard rock and free-jazz improv, then ignore it completely.

The members of Orion Tango were in an upbeat mood to mark the release of their second album The Apple of No (1k, 2017), about which Tim Motzer laughingly declared, "and we're not playing any of it tonight"—the joke being that this trio is entirely an improvising outfit. They hadn't prepared or rehearsed, not having seen each other for weeks, and there was no introducing songs or taking requests. The set was all about the magic of unexpected discoveries.

The band stayed active through a solid contiguous set with only an occasional lull. The rhythm players patiently began some light rumbling and clattering while Motzer spun an uneasy atmosphere of ringing wobbly chords with a whammy bar. Several minutes later they'd built to a wailing electrified crescendo, then soon eased down to a more steady simmer carried by sinuous bass lines. Before long Jeremy Carlstedt's drums had taken on a foot-tapping swing rhythm, over which Motzer started a searing solo until the others took a pause, at which point it was time to further turn up the distortion for an almost robotic tone instead.

Any idea that came up would be seamlessly woven into the mix: catchy funk lines descending a staircase of slashing guitar chords wet with echo, or perhaps a thumping blues shuffle overlaid with a veneer of Krautrock psychedelia. Barry Meehan's supple bass managed to keep in lively step with each of Carlstedt's twists and turns—or vice versa—to keep the pulse always flowing while never static. When Meehan sometimes locked into a repeating dub line, the drums would be free to loosen up the beat. Light cymbal rolls traded space with pounding rock-and-roll backbeats. If one or two members momentarily dropped out, someone else would chug along and leave an opening for the whole unit to shift somewhere different. The transitions made a series of natural mutations, always smooth and often delightfully surprising all the same.

It was less an actual dialogue than a sort of natural emergent behavior. Whatever motif happened to come up, the players were always willing to run with it and maybe make it sound a little weirder at the same time. Meehan would play with effects or bend his bass's neck to add a little nuance; Carlstedt leaned on the skins or tapped the outsides of the drums as the impulse hit. Motzer never seemed to stop changing guitar tones through background shadings and frenzied solos alike.

It wasn't always clear whether the players were helping shape things or just hanging on for the ride—and the same went for the small but enthusiastic crowd, judging by their cheering and occasional dancing. When things naturally wound to a stop and a glance at the clock showed they had more time remaining, there was nothing to do but start up again. More spacey atmospherics, powerful jungle drums and addicting bass grooves made the quarter-hour encore fly past in a blink. It was doubtlessly an exploration distinct from the sonic journeys they've been on before; future shows will also be the same and completely different. Each is a one-of-a-kind event in the moment, and this one was simply magic while it lasted.