Orion Tango: The Apple Of No 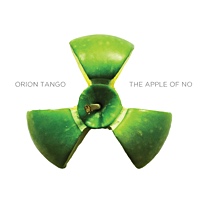 In times as strange and uncertain as ever, Orion Tango prefers to remember that there are some silver linings we can count on and "the world doesn't have to go this way," as guitarist Tim Motzer explains it. One steady constant of course is the power of music—edge-of-seat improvisation is this power trio's specialty, and the allure of discovery is one reassuring reminder that "we live with hope." All three members are longtime friends and collaborators ready to jump out and play without a net (or a seat belt for that matter), confident that they can trust the process and surprise themselves most of all.

Like their self-titled debut (1k, 2015), The Apple of No comes from a live-in-studio performance with no edits or overdubs. The occasion this time was a Philadelphia radio appearance on WXPN's The Key Studio Sessions. Given one hour to go nuts at will, the trio takes their listeners on a wild rollercoaster ride from slow ambience to primal jungle groove and crazy-eyed Krautrock insanity. Nothing stays in the same mold for very long, while the amorphous flow makes the shifts feel as organic as changing weather.

The three always have an ear on the overall picture in addition to listening to each other in the moment. The emergent structure of each segment makes its own kind of sense while avoiding conventional patterns. The opening "Disintegration of Turbulent Surfaces" is loudest in the first half before it subsides into a cosmic drift, for instance, whereas the tension-filled "Between Time" goes through multiple peaks and valleys at unexpected points. When Motzer starts to wail a few minutes in, his rhythm partners Barry Meehan and Jeremy Carlstedt decide not to follow along right away. Instead they keep the building energy banked at a slow burn until it's time to release some steam six or seven minutes further on.

ADVERTISEMENT
Instead of doing the obvious thing when building to a possible crescendo, the band is often willing instead to curb those impulses to enable a later payoff. With "To My Stars, Only Dust" it means ramping up with gradual deliberation for a while, hitting a loud freakout crossing Robert Fripp with Sun Ra two-thirds of the way through, then spinning a hypnotic guitar-synth echo to close it out. The whole affair ebbs, flows and ebbs again until the last finale drifts off into murky rumbles of thunder from Meehan's bass. Through all those modes, it's an hour packed full of dynamic twists and turns, always inventive and excitingly unpredictable.

Disintegration of Turbulent Surfaces/The Apple of No; To My Stars, Only Dust; Between Time; From Black to Light.