Aaron Staebell hails from the frozen community of Buffalo, NY and now lives in the slightly warmer metropolis of Rochester, NY. Holding two undergraduate degrees (Jazz Drumset and Music Education) and a Master's Degree (Jazz Drumset) from the Eastman School of Music, Staebell is an in- demand drummer and percussionist, clinician and composer both locally and nationwide.. As a composer, Aaron is gaining a reputation as a fresh voice in the musical landscape. He has written for jazz ensemble, solo voice, concert band, marching band, various percussion solo and ensemble settings, and his own smaller jazz groups. His compositions blend a wide variety of influences, from classical to jazz, along with modern pop and contemporary music as well. His pieces have been performed as far away as Seattle, Washington, and have been a part of a variety of different concert and recital programs. His most recent work, “If We Dont Change The Direction We’re Headed, We’ll End Up Where We’re Going”, was premiered by a consortium of high school students this past November, on a concert of premieres, both local and worldwide. He spent 6 months as the composer-in-residence at Fairport High School, in Fairport, NY, in the spring of 2006. He leads many of his own groups, which often play his original compositions and arrangements. His writing and playing can be heard on his large work, “Visit: A Song Cycle for Two Ensembles”. Chris Azzara of the Eastman School of Music cited “Visit” as “[bringing] together the elements of composition, improvisation and a narrative, for a musical journey that is personal and creative.” His new band, Bending and Breaking, is touted as “probably not what you are expecting.” They play with a very childlike sense of freedom, discovery and fun. There is most definitely a sense of humor present, but underneath that, there is a very serious commitment to honesty and truth in the music. Most of the music Staebell writes is inspired by friends, life situations and people that he comes across. It is a very humble music, that has also been described as “hopeful” and “idealistic”. Staebell also stresses the fact that he encourages each group member to bring an original voice to the compositions. As a performer, Staebell is active as both a drummer and percussionist. He is a recent addition to Paradigm Shift Trio and the Bill Tiberio Group. He is also a member of the Brownman Electryc Trio—American Version (Toronto, CA) and was formerly in the Buffalo-based indie-rock group, “Marcus VeryOrdinary”.

He is a frequent first-call for recording sessions and concerts for a wide range of projects. In the past, he has played with Wycliffe Gordon, Pat LaBarbara, Dave Finck and Theo Bleckmann. His playing can be heard on the new Paradigm Shift release, “Street Expressionism” (Nagel- Heyer). Staebell’s teachers have included Rich Thompson, John Riley and Bill Dobbins, and he has studied in workshops with Bob Brookmeyer, Tony Malaby, Claire Fischer and Mark Helias. He currently studies with John Hollenbeck, both compositionally and at the drum set.

“Garnering acclaim as a fresh new NY Voice as a composer, (Staebell’s) dynamic and energized style of playing never fails to captivate ears interested in innovation and risk-taking.” -from allaboutjazz.com

“Young, talented musicians with potential…they all appear to be pretty committed toward this approach.” -Garaud MacTaggart, Contributing Reviewer, Buffalo News, 3/17/08 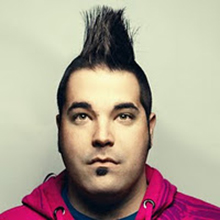 From: Bending and Breaking
By Aaron Staebell

All About Jazz musician pages are maintained by musicians, publicists and trusted members like you. Interested? Tell us why you would like to improve the Aaron Staebell musician page.