By NIGEL CAMPBELL
October 30, 2019
Sign in to view read count 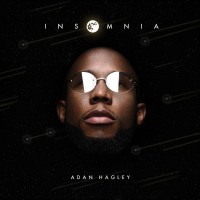 The Trinidad-born Nobel laureate, VS Naipaul, implied that Trinidad and Tobago was a country of mimic men, but its geographic location in the world and social history makes the pull of myriad sonic and rhythmic influences inevitable. Adan Hagley on his debut album, Insomnia, has made those connections from his wide listening palette. He cites Michel Camilo and Snarky Puppy as influences, but you also hear Ray Holman's melodic template, Elan Parle's early harmonic experiments and the late Raf Robertson's fusion ideas as sonic references. The local is not eschewed for the foreign as a model for jazz fusion access and success, and this is to be welcomed.

Hagley returned to Trinidad in 2013 with an undergraduate degree from Berklee College of Music. It shows in his use of an elevated musical language and vocabulary. Hagley on keyboards along with his tight rhythm section of Dareem Chandler on drums, Rodney Alexander of bass, Miguel Charles on guitar and Sheena Richardson on percussion, create a space for effective soloing mainly by Daniel Ryan on saxophones and Mikhail Salcedo on tenor pan, but the give and take, the call and response of the members of this band make for an album experience that does not disappoint, even for ears that have heard the evolution of kaisojazz towards wider Caribbean rhythms and pulses over the years.

The music on Insomnia, mainly originals, is more than calypso jazz in the 21st century, it is an amalgam of the wider Latin jazz influences and a funk aesthetic that is modern and accessible. The opening track, "Snarkyish," follows the pattern of the big band funk-jazz arrangement of its namesake, Grammy winners Snarky Puppy. Ryan's blistering tenor sax solo clears the way for Salcedo's and later Hagley's accelerating solos.

The Latin jazz-themed title track has Chandler and Ryan layering their instruments in a way reminiscent of Steely Dan's "Aja"—which had Steve Gadd and Wayne Shorter in similar roles—in its effective crescendo towards the sublime without the chaos of mingling timbres. "Shadow Dance" resonates with the calypso jazz that was the basis for a local renaissance of the genre around the turn of the millennium, with its dance impulse and a sonic heartbeat reflective of a soca rhythm. A hint of Andy Narell's melodic ideas with steelpan can also be heard here.

Anthony Woodroffe Jr.'s flute anchors the laid-back vibe of "Run Away," a kind of soundscape that implores the listener to escape to the islands. His solo also underscores the attitude that adventure is part of escape. "Gregory Street" is a nod to the music of Élan Parlē and a soloist's paradise with effective solos from Salcedo, Hagley and Ryan.

The last two tracks are covers, jazz saxophonist Sonny Rollins' "Oleo" and soca star Voice's "Cheers To Life." "Oleo" tries to retain a modern groove for Alexander to "fly." But the tightness that was admired in the other tracks veers towards the eccentric and mars an otherwise great solo. Where this track plays with our emotions in retaining a metropolitan viewpoint while in the Caribbean, "Cheers To Life" is just joy represented with élan. With a horn section that has Latin jazz written all over it, the song's tempo is slowed down just enough for Hagley to make the melodic statement on his piano. We not just sing along but identify with the musical nuances that are evident in its composition. Salcedo's improvised tenor pan solo, with his matched scatting bleeding through on the microphone, gives an idea of the elation of musicians at play. A descarga (a Cubanesque jam session) gives way to the coda that has Ryan burning through the chord changes with hard-bop ferocity. Magic.

All in all, this album is an important debut for a promising voice in the musical landscape of Trinidad and Tobago. Insomnia implies sleeplessness. Adan Hagley may be new on the scene but don't sleep on him; you could miss the makings of a young lion in jazz.