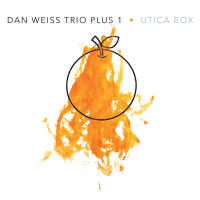 An inventive drummer whose technical facility is easily matched by his compositional ambition, Dan Weiss is not a percussionist to be trifled with. Whether he is offering idiosyncratic homages to some of jazz's foremost rhythm-men, as on his Sixteen: Drummers Suite (Pi Recordings, 2016) or attempting to fuse jazz and prog metal, as on Starebaby (Pi Recordings, 2018), Weiss is always looking to challenge listeners in new, surprising ways. At the same time, his obvious love of groove ensures that, no matter how forbidding the music might become, there will always be an entry-point enabling heads to bob and feet to tap. Nowhere is this better realized than Utica Box, a stimulating record that harnesses Weiss's conceptual sophistication to some of the most engaging music he has made to date.

The core of the band includes bassist Thomas Morgan and pianist Jacob Sacks, both of whom have worked steadily with Weiss since 2006's Now Yes When (Tone of a Pitch Music). The "Plus 1" is another bassist, Eivind Opsvik, whose valuable presence adds texture and deepens the mood and atmosphere of the music, particularly through his resonant arco playing. His superb bowing surges mysteriously on the opening title track, where he sustains the momentum generated by a compelling piano ostinato and subtly shifting rhythmic patterns, eventually combining with Morgan's own arco in a drone-like dialogue that creates irresistible energy. Elsewhere the two bassists play more conventionally, with "Rock and Heat" offering both Morgan ("Rock") and Opsvik ("Heat") the chance to interlock nimble bass lines for a couple of minutes before Weiss and Sacks join in on the track's infectious post-bop synergy.

The album's title is derived from the "Utica Crib," a long-discredited nineteenth century psychiatric treatment in which patients were confined in a narrow locking bed to prevent them from harming themselves or others. But aside from that disturbing association, the music here possesses a remarkable tranquility. The space in the music is perfect for allowing memorable themes to surface, as on "Orange," where the track's recurring motif always stays within reach, but at the same time preserving room for rhythmic invention and improvisation to occur as the piece evolves over its eleven-and-a-half-minute duration. The beautiful "Last Time One More Time" is another expressive piece that uses the two bassists to wonderful effect, their tuneful lyricism carrying the theme over Sacks' delicate arpeggios.

There's nothing timid about Weiss's compositions, and he is always teasing out fascinating rhythmic structures. But even when his drumming is at its most animated, as on "Please Don't Leave," Sacks' steady, deliberate calm manages to give the music a meditative center. And the album's most hard-hitting cut, the closing "Bonham," stays well short of full-throttle too, with a tempered approach that remains even more riveting for keeping its power in check—that is, until the last few minutes, when Weiss simply can't contain himself any longer and the music is finally unleashed fully, his furious pummeling doing ample justice to the fabled Led Zeppelin drummer for whom the track is named.

Weiss is a drummer's drummer, to be sure. Yet on Utica Box it is clear that he's much more than that, as his songwriting is as melodically rich as it is rhythmically complex, creating music with enough emotional depth to reward many encounters.