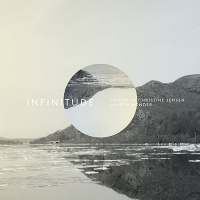 While they've often recorded together over the years—from the collective Nordic Connect quintet and trumpeter Ingrid Jensen's early albums including Now as Then (Justin Time, 2003), to many of saxophonist Christine's recordings, from her two much-lauded Jazz Orchestra albums (most recently Habitat (Justin Time, 2014)) to earlier, small group dates including Look Left (Effendi, 2006)—the two Jensen sisters (separated by four years) have never recorded an album collaboratively, with both names sharing the marquee equally...until now. While sharing has never been a problem for the Jensens, Infinitude represents a truly egalitarian collective, where both sisters and their three band mates contribute equally, based on their specific and respective strengths.

Three years prior to the release of Infinitude, the Jensen sisters delivered a powerhouse performance (albeit solely under Christine's name) at the 2013 Festival International de Jazz de Montréal, employing Infinitude's lineup with the exception of pianist Gary Versace replaced, on the record, by guitarist Ben Monder...no stranger to either sister musically, but especially to Ingrid, having shared both stage and studio with the trumpeter as a member of composer/arranger Maria Schneider's Jazz Orchestra from 2000's Allegrasse (Enja) through to 2007's Grammy Award-winning Sky Blue (ArtistShare). Any group that switches even a single member is apt to significantly alter its complexion, and there's no doubt that Monder's staggering virtuosity and dense sonics make for a much different experience than with Versace, possessed of similar technical mastery but who brings a lighter, more buoyant approach to the group. But as different as the two groups are, the empathic, longstanding rhythm support of bassist Fraser Hollins and drummer Jon Wikan—who date back together at least as far as Christine's A Shorter Distance (Effendi, 2002)— brings both consistency and a completely flexible approach to whatever music is placed in front of them.

It is, in fact, the combined years of experience, playing together in various permutations and combinations (and with other leaders like Schneider), that render the communication amongst Infinitude's five players so fluid, so seemingly effortless and yet so intrinsically deep. The two Jensens have, over the years, followed different paths that nevertheless seem to intersect on a regular basis: Ingrid, more focused as a player whose lesser compositional prolificity hasn't impacted her ability to contribute strong material to albums including her own At Sea (ArtistShare, 2006) and Nordic Connect's Flurry (ArtistShare, 2007); Christine, no less skilled an improviser but a musician who has, nevertheless, concentrated more intently on composition and arrangement in recent years, most notably with her own Jazz Orchestra and the recent group Transatlantic, whose Conversations (Linedown, 2015) featured music for an 11- piece ensemble led by and with compositions from Christine Jensen and fellow Nordic Connector, Swedish pianist Maggi Olin.

Another significant contributor to Infinitude's overall complexion is, indeed, the Jensen sisters' Nordic roots and their recent, more direct connection to it through Nordic Connect and, in the case of Christine, Transatlantic. Filled, as it is, with her electronically altered horn and Monder's densely overdriven guitar, Ingrid's "Duo Space" evokes images of cliff-lined fjords and vast mountainscapes—somehow retaining that misty, cloud-filled vibe even though it ultimately kicks into higher, more propulsive gear as it segues into the quintet's arrangement of Kenny Wheeler's "Old Time," the late trumpeter's own reworking of his title track to Azimuth's How It Was Then ... Never Again (ECM, 1994) ultimately appearing on his 2015 swan song, Songs for Quintet (ECM). The appearance of Wheeler tune is significant both in the late trumpeter's influence as a player on Ingrid and as a writer on Christine, with its mid-section improvisational blowout—featuring everyone in the pool as Hollins and Wikan somehow (magically) manage to hold the time together before the drummer takes a brief but impressive solo of his own—representing Infinitude at its most visceral and freewheeling.

Given Christine's compositional proclivities it's no surprise that half of Infinitude's ten tracks come from her pen, versus three from Ingrid plus one each from Monder and Wheeler; more than a bit superficial, perhaps, but it's not unfair to suggest that Jensen isn't just Canada's answer to Maria Schneider, but to Wheeler (himself an expat Canadian who emigrated to the U.K. in the mid-'50s), Bob Brookmeyer, Gil Evans and Paul Motian as well. What's perhaps most astounding about the saxophonist's ongoing, rapid ascendance as a writer is how she manages to make an 18-piece Jazz Orchestra (which delivered a short but stunning showcase set in Bremen, Germany at Jazzahead 2014's Overseas Night) so intimate... or, at times, Infinitude feel so much bigger than its considerably reduced quintet.

That said, Christine's album-opening "Blue Yonder"—driven by Wikan's polyrhythms, Hollins' sinewy bass line and Monder's relentless finger-picking—feels considerably more on the intimate side, as saxophone and trumpet melodies flow fluidly from organic unison to telepathic harmonic divergences, leading to an alto solo that winds its way in, out and around Monder's warm-toned voicings, before the guitarist picks up the baton for a delay/reverb/distortion-drenched feature of monstrous virtuosity.

Few guitarists can match Monder's stamina, as he demonstrated during his 30-minute solo performance at Ottawa, Canada's GuitarNow! workshop in 2013—and as his own "Echolalia" shows, here on Infinitude. His warm-toned, slightly delayed and upper register-heavy solo feels both inspired by John Abercrombie (and, by proxy, Jim Hall) and, following Ingrid's lengthy, lyrical yet effortlessly expert turn, like a stylistic counterpart to his earlier solo on "Blue Yonder."

But what Monder—and everyone in this group, for that matter—possesses in almost frightening technical mastery is tempered by wide-open ears that render every chord, every note absolutely relevant and lacking in the excess that can sometimes dilute musicians at this level of proficiency. The guitarist's work on Christine's appropriately titled "Swirlaround" is even more mind-boggling; an epically constructed, interval-leaping, cascading and ascending solo that follows the saxophonist's more laid-back turn, driven by Hollins and Wikan's gently funkified support, with Ingrid's softly effected trumpet building a final serpentine solo joined, for the song's coda, by the irrepressible guitarist and more restrained saxophonist for another collective extemporization of power, passion...and taste.

As thoroughly modern as Infinitude is, there's no denying the roots of some of its music. The way that saxophone and trumpet engage during Christine's "Octofolk" is an example of how warm and Gil Evans- informed the saxophonist's writing can be, even as it's initially defined by Wikan's dynamic ebb-and-flow and Hollins' impressive solo. As Jensen and Monder begin what ultimately becomes an alto/guitar trade-off—gradually moving towards a brief, in-tandem freak-out—the composition morphs into a high-octane, ostinato-driven feature for Wikan.

Infinitude may be the Jensen sisters' record (albeit with an on-cover with Ben Monder shout-out for the guitarist), but everyone is afforded plenty of space. Collaborative interpretation and engagement are the order of the day...as is textural experimentation stemming largely from Monder and Ingrid Jensen's use of electronics. And as complex as some of the charts can be, the quintet also demonstrates elegance and grace that are, perhaps, at their best on Ingrid's deceptive "Hopes Trail." Largely through-composed but affording everyone the kind of interpretive freedom that suggests a totally different take every time, Ingrid's initially balladic, time-based melodic theme is joined, for its second iteration, by Christine's empathic soprano saxophone. A brief rubato section leads, again, to a repeat of the composition's overall form, but this time opening up more, and gradually leading to a loosely swinging conclusion where the combination of trumpet, saxophone and guitar as frontline voices creates that sensation of this being far more than a quintet, even though there's no overdubbing to be found.

Christine's "Trio: Garden Hour" expands upon territory first explored on her sister's "Duo Space," this time bringing together saxophone, trumpet and guitar for a tone poem that possesses some of the previous tune's icy cool, but with a warmer middle section and a feather-light soprano saxophone circling around Monder's delay-driven harmonies and Ingrid's similarly reverb-drenched trumpet.

There are moments of sheer abandon amidst passages of greater compositional challenge as Ingrid's generally more atmospheric, hypnotic writing counters her sister's largely more grounded and oftentimes episodic work—and as much as Monder's "Echolalia" and Wheeler's "Old Time" add even greater breadth to Infinitude. It may be a record that's been germinating for some time, as scribe James Hale suggests in his brief but informative liner notes, but it's also the inevitable consequence of the various collaborations shared by Ingrid and Christine Jensen, Ben Monder, Fraser Hollins (truly one of Canada's best-kept secrets) and Jon Wikan.

Filled with compositional depth and improvisational heights, Infinitude is the record for which fans of the Jensen sisters have long been waiting. Hopefully it's not the last...and hopefully it's the beginning of a quintet that can get out on the road and deliver some concert dates when the Canadian jazz festival season begins in a few short months. Either way, with as impressive a debut as the overdue Infinitude, the only thing left to say is: "Please, sir, I want some more."