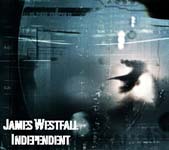 Given the vast amount of new releases these days, much of recorded jazz turns out formulaic. While following in the footsteps of forerunners and standards of the past, many musicians are hard pressed to create their own identities. But younger players like vibraphonist James Westfall exhibit potential in conveying their own ideas.

An active musician in New York, Westfall (who's in his twenties) has had the opportunity of studying and playing with a number of iconic jazz musicians—Terence Blanchard, Herbie Hancock and Ron Carter, as well as being one the first vibe players to be accepted into the Thelonious Monk Institute of Jazz. But within this rich background of history and learning, he has taken the opportunity to spread his own wings and fly.

One of the key elements of Independent is the means in which Westfall's band communicates fresh, cerebral and melodic compositions, rather than just archetypal jazz standards. Having performed together for a while, their performance is on point: the music features big horns, interesting rhythms, and the right amount of changes to heighten the listener's anticipation. The intro of "The Bionic Man commences with computer- generated sound effects, leading into a catchy melody with acoustic instruments and an interlude with rap vocals and synthesized sounds, all pieced together nicely.

The surprising, mid-tempo jazzy piece "Song for Harry Potter features glowing solos and a warm theme. The atmospheric "Acceptance is highlighted by Westfall's swelling vibe solo and quietly spaced sections. "Thestrals is an up-tempo treat that is reminiscent of the Dave Holland Quintet's music, with distinctly muscular bass work from Alan Hampton, passionate solos from Westfall and trumpeter Dontae Winslow, and a memorable coda with electronic keyboards. "Journey Through the Island shows the full extent of Westfall's writing, including detailed instrument sections within an epic theme.

With all of the theory, technical know-how, and clone-like music in today's jazz environment, it is nice to hear fresh and developing recordings like Independent. The CD also features a hidden bonus track: a straight electronica club dance mix, revealing yet another side of this aspiring young musician.