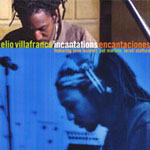 Yet another Cuban loss is Philadelphia's gain. Enter Elio Villafranca. Incantations Encantaciones, produced alongside Larry Cramer, is his sortie into winning leadership. Sorting out the pianist's musicality, brute force, effervescence, topicality, virtuostic independence (just pay attention in "You Spoke Too Soon" on this regard), patience, candor, and brazen delicacy is not that difficult. This is one of those records that recommend themselves with scant need for analysis or justification.

First off, the session is greatly enhanced by guitarist Pat Martino on "Assumption," "You Spoke Too Soon" and "El Hombre" ï" a Martino composition that gets Afrocubajazzified with a 6/8 beat. His licks are fun to watch as they are edged on by the freer tightness provided by the support of the nastily thick rhythm section, only to have him punch back strong. Secondly, Jane Bunnett ï" Cuba's Jazz Matron Saintï" just plays the shit out of the session up and down ï" as her iconic braying proves in "Cacique." The sonic personality of the record is akin to hers, featuring flutes, soprano sax with trumpet and flugelhorn in charge of Terell Stafford. On "Assumption" Stafford speaks his mind with impetus and facility, and on "Oguere's Cha" his prelude to Bunnett's fluting is extremely appropriate. He, nonetheless, doesn't get enough space throughout the album as a soloist. Needless, to say, both excel in their ensemble playing ï" which is not limited to the more testicular performances.

Lastly, the woodsy percussive largess of bassist Carlos Henrïquez and the grown-up discipline of trap drummer Dafnis Prieto, paired with Wilson "Chembo" Corniel's youthful afinque on percussion, give Villafranca wide reign to explore, guide and inspire while being utterly challenged. They function and get along well as a unit, as seen in "Negrita Prende la Vela" where Colombian mapalï and Cuban makuta traces rest on jazz and Puerto Rican bomba ï" the latter's omission in the liner notes notwithstanding.

The writing is unsullied and freed from predictability. The performances touch varying moods, from festive to strongly introspective, and elicit satisfying happiness without relying on anything else but a lot of heart and brainpower. This recording is a welcome relief among both jazz and Latin jazz releases and it makes one wonders where Villafranca will go next. Wherever he goes, one must follow.