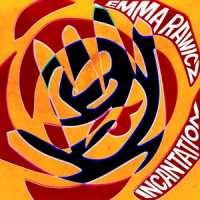 Incantation is the debut album from British tenor saxophonist Emma Rawicz, whose playing has a degree of poise that is not often found in a teenager (she is nineteen years old) on their inaugural outing. It is not unprecedented, however, as we are reminded by the case of drummer Tony Williams, seventeen years old and brimming with confidence when he joined Miles Davis' band.

Anyway, Rawicz, like Williams, shows every sign of knowing where she wants to go with her music and, mostly, she gets there.

Her playing, like every tenor saxophonist since the 1960s, has traces of John Coltrane, but more evident are those of Dexter Gordon and Joe Henderson (who, coincidentally, was a primary influence on another British tenor player, Nubya Garcia). Add to that mix an empathy with fusion and groove, a splash of Afro-Cuban, a kicking young keyboards, bass and drums trio, and mentor and fifth band member, guitarist Ant Law, and you have lift off.

All the material was written by Rawicz. "I wrote 'Voodoo,' the first track on the album, based on a crazy, abstract, colourful piece of art," she says. "I just experimented with sound and found the composition out of it. Then I chose other words based on this theme—like incantation, omen, wishbone, etc.—and used those words as prompts for composition."

Rawicz also plays soprano saxophone and flute and sings on the album. Remarkably, although a musician from childhood, she only discovered jazz aged fifteen and took up the saxophone a year later. You would not guess that listening to Incantation. Rawicz is a name to look out for.