Nancy Harms: In the Indigo 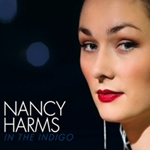 Jazz vocalist Nancy Harms presents In the Indigo, a sultry yet intelligent offering of old standards, original material, and the occasional pop cover. She sings like a woman who's sure of herself. Whether singing John Mayer's "Great Indoors" or Irving Berlin's "Blue Skies" she has a way of making even the simplest lyric sound like a masterpiece of thought. Armed with a talented band and beautiful vocals, In the Indigo is good packaging for even better music.

If the recording could be summarized in a few words, then the general sound would have to be described as cool and confident. Singing is something that Harms is good at, approaching each song like a skilled scientist who knows how to dissect it and build something better. She doesn't scream when singing and doesn't try to reinvent Billie Holiday, Dinah Washington, or Ella Fitzgerald; she has her own voice and that's good enough.

On the disc's opening number, "Bye Bye Blackbird," Harms and the musicians sound as if their meeting was one of "love at first sight." Neither tries to one up the other—the bass makes the first introduction, opening the song and laying the foundation for its structure. Harms joins in, sounding as though there's no place else she'd rather be. Her voice is so inviting that before long, the trumpet, piano, and drums make their presence known as they all come together and soar.

The relationship between Harms and the band strengthens from minute to minute and song to song, ending as beautifully as it began. With her best work shining through in the disc's title track, "In the Indigo" as well as "Cry Me A River," "Great Indoors," "Surprised By the Morning," and "Blue Skies," the singer has made it known that she's one to watch. With better known vocalists like Diana Krall, Gretchen Parlato, and Norah Jones at the forefront of the contemporary jazz vocalist movement, Harms will be in good company on her rise to the top.

Bye Bye Blackbird; I Wished on the Moon; Softly, as in a Morning Sunrise; In the Indigo; On a Clear Day (You Can See Forever); Cry Me a River; Great Indoors; Surprised by the Morning; I'm Pulling Through; Blue Skies; Reach for Tomorrow.

Title: In the Indigo | Year Released: 2010 | Record Label: Self Produced