By George Kanzler
August 11, 2008
Sign in to view read count 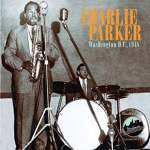 In today's growingly fractured jazz world, it's hard to fathom how strong was the hegemony of Charlie Parker and bebop over the jazz world in the decade after World War II, especially during the years, like 1950-51, when Parker was actively touring. For proof of bebop's international reach and appeal, this is a prime historical document: a recording from a concert in Malmo, Sweden featuring Parker with local musicians in a typical bebop quintet setting. At least for some of the concert; the rest of it featured the same configuration, but with the Swedish alto saxophonist Arne Domnerus in place of Bird. Joining both were trumpeter Rolf Ericson, bassist Thore Jederby, pianist Gosta Theselius and drummer Jack Noren. The sound quality is not great; in fact it's iffy, the piano largely off-mic and the drums a bit muddy, but the horns sound fine for a live recording of the era and the bass is relatively clear (the notes say Jederby impressed Bird).

Bird is clearly in charge on his four tracks, with the Swedes trying and largely succeeding, in tagging along. Parker and Ericson both blaze through a typically racing "Anthropology." The lesser known Howard McGhee/Parker line "Cheers" finds Bird at his most unpredictably inventive, feinting, bopping and weaving among fast runs and intense melodicism in his solos. It also suggests Ericson was closer to McGhee and Red Rodney than Dizzy or Miles. There's a brief, all-Bird, "Lover Man" followed by a "Cool Blues" that's missing Parker's opening, the recording beginning in mid-trumpet solo so we only hear Bird's final four-bar trades with Ericson. The three standards with Domnerus are given bop treatments, the saxophonist displaying a style suggestive of analyzed, organized Birdology. Unlike the Parker tracks, these display a cohesive, interactive band, Domnerus and Ericson easily trading loose phrases rather than clipped four-bars and tunes outfitted with routines. The best and most intricate is "Out of Nowhere," with a rubato tandem opening, then horn solos traded first over just walking bass, then a Latin rhythm and finally a fast bebop 4/4.