By JOHN KELMAN
November 1, 2011
Sign in to view read count 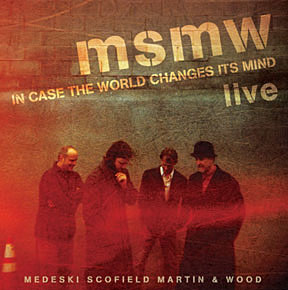 With significant pressure on artists to look for new territory to mine and new collaborations to explore, it's always great to see those that have worked well kept as ongoing concerns, like guitarist John Scofield's first-encounter with jam band darlings Medeski, Martin & Wood on the superb A Go Go (Verve, 1998). The now-named Medeski Scofield Martin & Wood still reconvenes occasionally, with its follow-up, Out Louder (Indirecto, 2006), a more free-wheeling alternative to its predecessor's focus on Scofield's particularly fine writing. Five years later, In Case The World Changes Its Mind strikes the perfect balance between form and freedom.

Recorded on tour in 2006, while some of the same songs also appear on the European double-disc version of Out Louder, they're different versions. If that bonus, EP-length live disc gave fans a taste of MSMW in performance, then In Case The World Changes Its Mind is the real deal, its groove-laden, 115-minute set of 11 tunes equitably split between MSMW's two studio discs, with an extended jam thrown in for good measure, along with a gospel-drenched version of "Amazing Grace."

Scofield may be working his softer side lately on his relaxed A Moment's Peace (EmArcy, 2011), but he's in incendiary form here, in particular on a searing version of "Miles Behind," where his wah-driven guitar goes head-to-head with John Medeski's grittily overdriven electric piano, bolstered by a nuclear groove from bassist Chris Wood and drummer Billy Martin that seems always on the edge of a precipice—threatening to dissolve into complete anarchy at times, but always pulled back from the brink at the last possible moment. Medeski's piano also drives the greasier title track, though he mixes it up with a melodica in the front line with Scofield, who's featured in an extended duo with the second line-informed Martin, the guitarist's complex voicings and angular phrases leading to some visceral slide playing. Both these songs from Out Louder are considerably expanded in length here; exemplifying one of MSMW's major MOs: taking ideas stemming from jams and turning them into tunes.

The material from A Go Go is given equal chance to expand, in particular the 11-minute set-closer, "Hottentot," where Medeski's swirling organ work is at its best, though his remarkable command over tone and texture—an analog fan's wet dream—is a cornerstones throughout. A Go Go's title track is equally compelling, while a medley of that album's "Deadzy" and Out Louder's "What Now" blends idiosyncrasy with straightforward boogie to great effect.

But the centerpiece of In Case The World Changes Its Mind is the 25-minute "Walter Hanuman," starting with a sprawling N'awlins jam that takes its good time getting to the core of Out Louder's "Hanuman," stretching inexorably towards a fiery climax, only to wind down with an extended outro defined by Medeski's mad-scientist synth and Scofield's reverse-attack loops. MSMW may only convene occasionally, but with MMW driving Scofield to places he'd never find otherwise, and the guitarist lending MMW a stronger compositional focus, it's the perfect combination, with the whole of In Case The World Changes Its Mind clearly greater than the sum of its considerable parts.