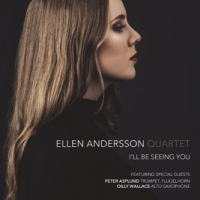 Swedish vocalist Ellen Andersson sings in a strangely forced way, trying to imitate Billie Holiday but sounding more like someone in dire need of a laxative.

This is most apparent on "You've Changed," which Holiday recorded on her 1958 Columbia album Lady In Satin when past her prime.

In 2013 another Swedish singer, Isabella Lundgren refashioned history, singing the song as Lady Day might have done when young, on another Prophone album, Ela, by guitarist Anders Färdal and harmonica player Luciano Mosetti. Lundgren's version knocks Andersson's stiff, self-conscious interpretation into a cocked hat, despite heroic efforts by guest trumpeter Peter Asplund and bassist Hannes Jonsson to rescue the number.

"Gloomy Sunday," another number associated with Lady Day, while equally painful on occasion shows an adventurous spirit and features an interesting solo by another guest, Danish alto saxophonist Oilly Wallace.

He is featured too on "I Cried For You," otherwise notable for Andersson's bizarre phrasing.

But it's her first album so let's not be too harsh on the poor girl. She has a good voice and shows considerable ability on her wordless forays, where she no longer attempts to sound like Lady Day and is relieved too of the responsibility of reinterpreting lyrics from the Great American Songbook, which have all been sung countless times before.

Her work with Asplund on Charlie Parker's "Au Privave" sees her at her most relaxed and confident and she also goes in for some admirably adventurous scatting on the title track, "I'll Be Seeing You."

S’Wonderful; You’ve Changed; A Day In The Life Of A Fool; Au Privave; I’ll Be Seeing You; Gloomy Sunday; Everything I Love; Smile; I Cried For You.