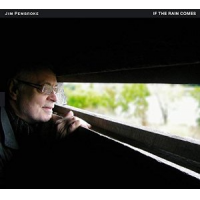 Singer / songwriter Jim Pembroke has had a fascinating career to say the least. A native Londoner, Pembroke journeyed to Finland to visit his then-girlfriend in the mid-1960s. He wound up staying, and by the end of the decade he had recorded an album with the seminal Finnish rock band, Blues Section, taught himself piano, and gone on to form co-found the country's most well-known progressive rock band, Wigwam. Staying with Wigwam into the late 1970s, Pembroke also maintained a successful parallel solo career. He recorded a half- dozen or so (the first under the pseudonym "Hot Thumbs O'Reilly") quirky country-tinged blues-rock albums that, in their own way, were no less ambitious than the overtly art-rock oriented efforts of Wigwam.

If The Rain Comes finds Pembroke alive and well and living in Kansas City of all places, three-plus decades later. Though recorded in Olathe, Kansas, If The Rain Comes reunites Pembroke with a variety of musical compatriots from Finland including former Wigwam keyboard players Pedro Hietanen and Jukka Gustavson, and bassist Ulf Krokfors, best known for his work with Edward Vesala and Raoul Bjorkenheim, among others. The album also serves as an extended tribute to Henrik Otto Donner, Pembroke's close friend and mentor, who contributed his characteristically delightful string and horn arrangements to this album before his untimely passing.

From the outset, the primary musical influence operative on If The Rain Comes is The Band. The combination of Pembroke's soulful world-weary vocals, the dual-keyboard instrumentation (Pembroke plays piano while Hietanen sticks mostly to the accordion and Hammond B-3), the slow-to-moderate tempos, soaring slide guitar, and the blues- steeped, country-inflected compositions evoke the spirit of Bob Dylan's celebrated former backing band. Though they're all Pembroke originals, there's a welcome, lived-in familiarity to the title track's somewhat resigned blues-rock, as well as the gospel-tinged "Gone With The Song," and "The Birds of Summer." Pembroke's voice recalls Randy Newman's on ballads such as "A Former Army," and "My Time Again." The former gets a jazzy twist from Jukka Harju's French horn solo, while the latter is illuminated by Donner's sprightly string arrangement. The singer's penchant for witty lyrics is in full force on "Forever Kinda," "Love is Easier," and a minute- long goof "The DNA Club."

Pembroke's prog-rock and jazz-rock tendencies are also evident, most clearly on the almost-instrumental "Doo Wah," which adds Manuel Dunkel's tenor saxophone to the mix and lets Hietanen, Krokfors and drummer Mika Kallio loose for a round of appealing solos. "Columbus In India," which sounds like a long-lost Little Feat jam, is a multi-sectioned piece featuring guitarist Jukka Orma who cuts loose with an extended, soaring guitar solo over a surging, jazzy 6/8 pulse. Orma gets another opportunity to wail on "Birds of Summer," which transitions swiftly and smoothly from down-home blues-rock to old school, 70s style jazz-rock. "Forever Kinda" is essentially a Mose Allison-styled jazz tune played with a reggae lilt. Donner's strings add an appealing twist here.

If The Rain Comes is a fine rock album of the sort that seems in short supply these days; quirky but mellow, a little dark, not over-produced, unafraid of its own old-school sound, recalling times past without wallowing in them.

If The Rain Comes; Gone With The Song; Columbus In India; Love Is Easier; Forever Kinda; The DNA Club; A Former Army; Doo-Wah; My Time Again; The Birds Of Summer; Midnight In Abbey Road.