By TYRAN GRILLO
December 19, 2014
Sign in to view read count 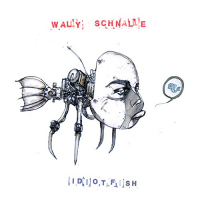 For his ninth album as leader, and with over 40 years of experience at the kit, drummer-composer Wally Schnalle has pulled out all the stops. Working sound bytes into delicate infusions of soul, jazz, and electronica, Schnalle nourishes an integrated field of sound that at once evokes seventies nostalgia and progressive futurism. Toward achieving this effect, he employs the skills of a prodigious trio of West Coast musicians. Guitarist Hristo Vitchev, bassist Joe Constantini, and keyboardist Frank Martin make for a formidable combination of fire and cool.

"Market Fresh" sets the stage for the album's tasteful multimedia assembly and proves a welcoming place to be. Lush and meticulously thought out, it travels through neon-lit cityscapes with innocent wonder. That Schnalle and Company delivers such freshness from behind a classic sheen is remarkable. Also remarkable are the idiosyncrasies each band member brings to the journey. There's the tirelessly prolific Vitchev, who foregoes his usual amplified acoustic (though he does frontload it on one track) for a grungier electric, with which he elicits a legato approach that is nevertheless mighty in its descriptive powers. "Breath Takers" is a choice vehicle for the guitarist, who from atop a fortress of groove unfurls banners of fire. "Prohibition 21" and "Poolside" are further standouts, and some of the album's most tactile experiments. In the latter track, Martin is also noteworthy for his atmospheric brokering. The keyboardist wears the most hats, providing a striking variety of colorations throughout the album. His pianism often recalls Rainer Brüninghaus, as in the sweeping "Ferns," while the more overtly technological murmurings of "Sweetener" unleash gravid synths among hybrid circuitry.

Schnalle enlisted the talents of Constantini when the bassist was barely out of high school. He has clearly evolved into an exciting player whose youth, if anything, keeps his mind open whatever the bandleader throws his way. Whether enlivening the delicate fray of "Erroneous" or navigating the tilted geometries of "Sleeper Class," he finds traction in even the most outré constructions. Schnalle, for his part, is more than the glue that keeps everything together. He is more like a GPS—which is to say he has the entire map already wired in his brain and provides direction through the cues of his boldly original compositions. His bandmates follow suit, painting the way with distinctive re-routings in a sonorous tangle. All of these elements and more reach greatest attunement in "Squanches." Between the phenomenal time-keeping, soaring solos, and a Boards of Canada-esque analog backdrop, it's a twisted and brilliant recipe.

Schnalle's band puts the "ion" back into "fusion," leaving the listener positively charged.