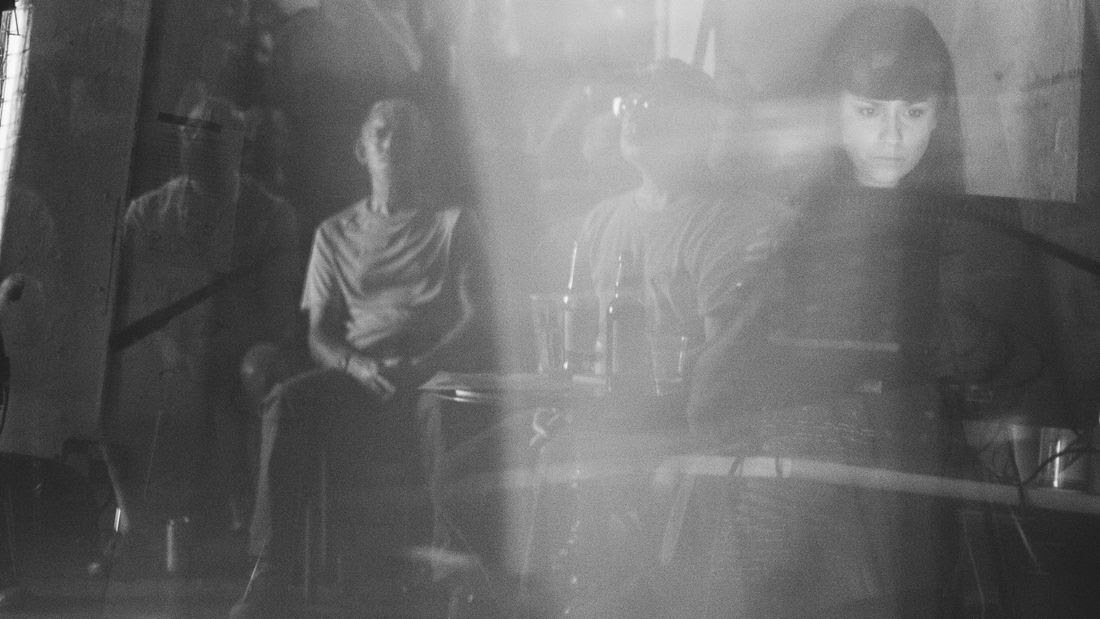 Noise isn't really noise. Much of this weekender's content was somewhat sculpted, even if often rough (or scaly, or oozing) to the touch. A 'noise' outcome is usually in the eardrum of the victim, as interpreted by prior taste. The first edition of this festival operated in such a manner that it could easily lure listeners who held ostensible backgrounds within free improvisation (jazz-descended), electroacoustic music, moderne abstraction, minimalism, drone and/or ambient scuzzing. Whatever route of arrival, open-and-clear-tunnel ears were an advantage.

The festival is a joint operation between artistic directors Andrew Woodhead and Sarah Farmer. At this first stage, Ideas Of Noise operated on a smallish scale, but this was to its advantage, creating an aura of intimate immersion. There were a good number of performances, but always with the chance to pause and reflect in-between sets. To mull, and swill around.

At the Vivid Projects gallery on the first afternoon, local performer Billy Lucas sat on the floor with his personal cassette players plugged into a pair of big ass speakers. His insidious colonisation of audio perception began in a small alcove, and it was instructive to loiter outside its opening, conversing with folks, but with one ear on its steady short-loop development of sonic seepage, beginning to blanket beyond its enclosed corner. At four hours, "Fragments I" was designed as a slowly evolving environment, and it was also even more pleasurable to actually step inside the mini-room, and give the evolving music some complete attention.

Simon Paton gave a 30 min performance along conventional physical lines, though still with some unusual playing relationships. His bass was central, but also acted as a pushing goad for the more delicate inventions of his colleagues. There was much swapping between guitar, trombone, djembe, xylophone, French horn and mask-flute, the orientation poised between rock, jazz, improvisation and moderne composition, by turns delicate, fuzzed and humorous.

The violinist Richard Scott began his solo set outside the building, but this turned out to be unwise, as his subtle unamplified traceries were soon overwhelmed by stray rock'n'roll sounds bouncing out of an open rehearsal room window, drowning out his efforts. It was best to follow Scott back upstairs, and into the gallery, where the music continued in earnest, with a more linear folk-minimalism development than some of his accustomed improvisations.

A brisk stride across Birmingham's old industrial quarter, Digbeth, led to The Edge, another cultural home that combines visual art and music events. It would have been easier to have these two venues at closer proximity to each other, but ultimately, the Saturday and Sunday programmes would concentrate most of the performances at The Edge anyway.

The evening set featured a duo between harpist Rhodri Davies and percussionist Mark Sanders, with a beefy rock drive to their beginning. Davies sounded more like a guitarist on his feedback-loaded homemade harp, while Sanders chose a narrower palette than usual, more direct and punchy. A howling overload grew, as if produced by an Ethiopian kraar, a traditional lyre, but in deranged mode. Davies dipped into tonalities that suggested Japanese koto, but still rooted in East Africa. Sanders skittered around with his brushes, and the pair seemed to avoid an improvising vocabulary, making the listener contemplate the similarities with an African session, as Davies created a Konono No.1 vibrational buzzing, in both the lower and higher frequencies. Sanders spent more time using his core drum kit tools. As the set climaxed, more and more of the harp strings snapped, as Davies brutalised them with abandon. This is apparently a deliberate self-destruction strategy, and it sure sounded exciting, justifying the future time spent re-stringing. Half of them were gone by the end, leaving a balding harp. For the next set, they were joined by violinist Angharad Davies, which took the extreme levels down a notch, it being difficult to follow the previous set's explosiveness.

As already erected at the Supersonic festival a few weeks earlier, the Ideas Of Noise shed made a comeback for its own weekender, sitting just outside The Edge, encouraging not much more than duos due to its tiny space. Dropping down from Sheffield, Garlic Hug made a mark with one of the weekend's most arresting sets, right at the beginning of the Saturday evening run. Helen Papaioannou played speed-glottal alto saxophone, whilst Alessandro Attavilla worked at untying his electronics tangle, otherwise known as a Microbrute analogue device. Laptops were also involved. The Garlics capered in racing prog fashion, making a math-freedom sound, with appealing metal percussion samples, either as beat decorations, or as pure grinding distress, as they veered into an extreme slow-dance minimalism. These were the sounds of the garden shed: sawing wood, over rollin' beats, a dark humour in place throughout. Isolated bursts of drilling magnified the near silences. The set sped by, due to its rich mineral content of micro-events, always trowelling up some fresh audio truffle.

The Celebrating Sanctuary organisation presented its own set soon afterwards, inside The Edge, on the main stage. Ideas Of Noise co-organiser Andy Woodhead played keyboards, with Didier Kisala (vocals/guitar), Millicent Chapanda (mbira/percussion) and Aaron Diaz (trumpet/electronics). This group was called Elda, and involved the blending of naked Afro-acoustic sounds with curlicued jazz atmospherics, wefted via effects manipulations. Their beguiling impact was magnified by following Garlic Hug, as Elda savoured a softer, gentler area of adventure. Chapanda's mbira was one of those full models, set inside a gourd, complete with metallic rattles, whilst Woodhead provided copious bass line input, pulses growing, a swirling mute-trumpet captured then released via cloaking fx. Their second number utilised Congolese rain stick, high vocals, and a clipped jazz funk feel, whilst the third had Chapanda holding Zimbabwean court. This was well suited to the ambient groove-making. To conclude, Woodhead delivered another of his hookline bass figures, and Diaz removed his mute, for full crisp jazz solo effect. Comparing Garlic Hug with Elda was a positive tactic for understanding the changing faces of 'noise.'

The Saturday night was easily the festival's most impressive stretch, as one powerful act followed another. Anna Palmer is a central presence within the fast rising Birmingham band Dorcha, here giving a solo performance, rooted somehow in singer-songwriter forms, but with a very abstract bent. She glanced bowed strikes off the top of her bass neck, injecting sudden surges of laptop, shunting straight out of the Stockhausen songbook. Palmer's vocals leaped towards shouty indie rock, but then a controlled humming restraint took over, with precise footpedal triggering, followed by some fluted keyboard progressions, as she actually entered into the realms of a song, orating with full Gothic drama. Palmer has grasped the gobbets that hang between rock and improvised music.

Next up was a meeting between two significant figures on the Birmingham underground music scene. Bassman (and beyond) Chris Mapp hails from a jazz foundation, whilst laptopper Annie Mahtani has a background in electroacoustic music. Their hardcore tonal wrenchings matched each other very well, to the extent that their knitting was frequently difficult to untangle into distinct patterns. That's the way they made it, their extreme landscaping bereft of obvious bass playing, as Mapp turned his axe into a freed audio tool, the glitches getting more cracked, like melting leatherette. This was often soft noise, a pliable growth of Colosseum proportions. The rhythms developed, and our innards were pulled out of our pits.

The last combo were Strobes, a trio between Dan Nicholls (keyboards), Matt Calvert (guitars/synths) and Dave Smith (drums), who ended up sounding ultra unsubtle when set beside most of the day's preceding performers. They possessed an unrelenting hardness that tended to bludgeon the crowd, leaving no room for thoughts between their pressed edifices. With the venue's low stage, it was also tough to snatch a view of what they were physically about, as they ran through their moves of mathematical twitchery. Your scribe once caught Calvert's band Three Trapped Tigers, who suffered from similar density problems. Nicholls managed to release the spirits eventually, with an explosion into some circus spiralling on his keys.

The Sunday programme was lighter, and this people's penner had to dash off to Bilston at the 11th hour, to catch The Muffin Men, a group dedicated to the repertoire of Frank Zappa. Thus missing saxophonist Xhosa Cole, presenting a new work for flute and string quartet. Earlier on, though, there was another highlight set from the Post-Paradise folks (who operate a concert series in Birmingham), featuring a pair of electric guitars, laid flat, and subject to various manipulation techniques. Sitting close to an amplifier, it was loud. In fact it would have also been quite powerful for those who were positioned further away. Glenn Branca would be the unavoidable antecedent. Maya Verlaak and Richard Stenton set about strumming up ringing lattices, using vibrators or bows to tease sensitivities out of their clip-prepared strings, percussive and vibrational.

This first Ideas Of Noise weekender was a great success, making 'experimental' sounds in a homely, collective environment, embracing many diverse ways of winkling out so-called noise, tactics gleaned from rock to free, and from traditional Afro to composed moderne, amongst other sources and routes. They already have a presence at Supersonic, so it's hoped that 2019 will bring further guest appearances in the Ideas Of Noise shed, plus, most importantly, the second edition of their own festival.