Home » Jazz Articles » I Scare Myself by Dan Hicks

I Scare Myself by Dan Hicks 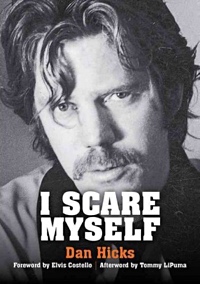 The late Dan Hicks is described by Kristine McKenna, editor of this rambling but curiously engaging autobiography, as "a musical genius." He wasn't, although he did write some amusing songs and played competent guitar. This and a laconic sense of humour made him an influential figure on the burgeoning San Francisco hippie rock music scene in the 1960s and 70s, though he always saw himself primarily as a jazzman.

Being in the wrong place at the wrong time, Hicks consumed extraordinary amounts of alcohol and drugs which impeded his musical abilities and judgments. The title of this book, taken from one of his better songs, is very apt. The latter part of the autobiography describes Hicks' harrowing fight against drug and alcohol addiction and is unremittingly dark. He must have scared himself a great deal during these years. Yet, by the time of his death from liver cancer in February, 2016, Hicks seems to have reached at least an accommodation with life, of which more later.

His early musical career, playing drums with The Charlatans, a formative West Coast psychedelic band, at first gets cursory, almost grudging coverage: "I liked being the drummer of The Charlatans and dug being part of the scene." And that looks like being your lot, folks, but no...

Perhaps goaded into revealing more by Ms. McKenna, Hicks recalls that when the band auditioned for a legendary West Coast rock venue The Red Dog, "a guy came along and said, 'Do you want your acid now or after dinner?'"

Sly Stone produced some of the Charlatans records. Hicks says: "All I can remember about Sly was him running around from one instrument to the next, showing us how versatile he was. I got the impression he was trying to impress us, like dig me. It was kind of rinky-dink."

Salvation was at hand, albeit in unlikely guise. After dropping acid at a sacred Indian burial site, the shade of Gabby Hayes "came" to Hicks and as a result, for reasons that remain obscure, he decided he no longer wanted to be a drummer—"What I wanted to do is sing and play guitar."

During the musical odyssey that his life then became, Hicks ran into some big names but, no doubt because of all the dope that was around, found he couldn't remember much about them when compiling this opus. Bob Dylan "jumped around a lot and was kind of funny." Grace Slick, of the Jefferson Airplane, "had a strident voice." Janis Joplin, on the other hand, was "cool... a rough, tough beatnik." The Beatles were "fine." Grateful Dead "had a certain sound and a certain function." Jerry Garcia was "like an icon, and he kind of deserved to be."

Hicks is never what you might call specific. "A lot of stuff happened in a really short period of time," he writes. Places don't have much meaning for him. It's "Okinawa or someplace... Korea or someplace..." But other things have more relevance: "I do remember doing angel dust at one point... I was in my early thirties when I did that."

Occasionally—perhaps uncomfortably aware that he is leaving something for posterity—he tries to get to grips with life. "I struggled for the first time with the feeling that something serious is going on here, I'm isolated and I'm on my own and no one is experiencing this thing I'm experiencing, and I don't know what to do about it except try to keep living with it. That was the first time I got that down. I was at a low period in my mental makeup, and I was having kind of loss-of-self feelings. I was experiencing that stuff, for sure."

There were also girls, of course. "I guess you could say I left a trail of bodies behind me," says dashing Dan immodestly.

So sex and drugs, yeah; but rock 'n' roll, no, not really. "I was a jazz aficionado from the get-go... it's what I identify with, and what speaks to me." With a ghostly Gabby Hayes still watching over him, Hicks decides to form a new band. "I made a list of names that might work and The Hot Licks was on that list. Hot Licks is an old jazz phrase I first heard in a Glenn Miller tune from the 40s called 'Juke Box Saturday Night.'

"We'd record the rehearsals and listen to see how we sounded... That was really fun... I was really digging that it was happening. I had confidence in the band and thought the sound was unique, and as far as my own ability, I guess I figured I was good enough to get onstage. I could hear the thing coming alive, and I thought I had something pretty special."

A favourable Ralph Gleason review in the San Francisco Chronicle gave Hicks still more confidence and shortly afterwards The Hot Licks cut their first album for Epic with celebrity producer Bob Johnston, who's made records with Johnny Cash and Leonard Cohen. Hicks wasn't impressed with Johnston. "Because he mixed it by himself, he left in mistakes he didn't know were mistakes. It was sloppy, he put echo on everything—it was a mess." Hicks wound up remixing the record himself.

He probably didn't do himself any favours with his complaints about Johnston and with Epic not keen to do a new record, he signed with Blue Thumb and cut the live album Where's The Money? which he rates as "one of the best things we did."

But after five years or so, Hicks broke up the band. "I didn't want to face it anymore, and I didn't want to be a bandleader. It just felt like the writing was on the wall, and this band was on the way out. There were a lot of funny personalities in the band and we were forced to be together all the time and we started getting bitchy and not liking each other."

Hicks doesn't spare himself from blame. He admits to taking heroin, describes life in those days as "one big dysfunctional blur," says he was sometimes "an a-hole" but sums it all up with a good throwaway line, "Let's just say I didn't always have a good attitude."

After the Hot Licks break-up comes the period Hicks calls "the kamikaze years." In many ways, this is the most interesting part of his book: a rambling, stream-of-consciousness-type catalogue of self-inflicted stoned and drunken misery of which he says, "I guess you could say I was being self-destructive, but at the time it felt kind of constructive. I was enjoying the freedom and a certain loose attitude, and it didn't feel destructive to be down at the bar at noon. I was enjoying this carefree character I was becoming, and there were women who came and went."

But the buzz didn't last. "Around 1980, I started to think that maybe this lifestyle was a problem. I stopped going out and started buying booze and staying by myself, and I wasn't talking to people very much."

He was in and out of rehab. "You feel like you're not experiencing what other people are feeling, and you have a box around your head and you're miserable and sick, and you don't see any future, and you don't like yourself, and you're going through the motions of being awake."

Hicks was helped off this downward spiral by girlfriend, later wife Clare Wasserman and went on to resume a relatively low key musical career and to lead a regular, reasonably reconciled sometimes happy, sometimes blue kind of life, like most people.

For such a turbulent character, his death seems to have been remarkably peaceful. Clare recalls: "He just closed his eyes and folded his hands on his chest, and then he went to sleep for a couple of days and just slipped away. There was never a sign of pain or struggle and it was a good leaving."