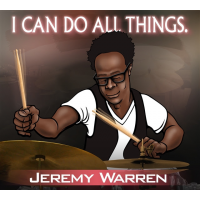 If the title of drummer Jeremy Warren's debut album sounds a tad hyperbolic, that's because Warren has faced and overcome more than his share of adversity en route to living his dream. As a child, Warren was diagnosed with Stevens-Johnson syndrome, a rare and sometimes deadly disorder of the skin and mucous membranes. Told he might not live to adulthood, or could be blind, Warren underwent four corneal transplants while battling the disease. Not only did he survive SJS, Warren also managed to graduate from the University of Memphis and earn a master's degree in music from New York University. And oh yes, along the way he started drumming and composing as a way to satisfy his musical desires, which had also begun in childhood.

Warren's preferences run the gamut from blues, R&B and hip hop to neo-soul, rock and jazz, each of which is given a cordial nod on I Can Do All Things, which does its best to generate a wide appeal. In doing so, however, it runs the risk of turning away purists whose tastes may be confined to one genre or another. To avoid this, Warren infuses most tracks with an insistent rock beat, which serves to bind the various numbers while at the same time lending a certain sameness to its rhythmic component that may also unsettle those whose penchants may lie elsewhere. It is, however, well-suited to the arrangements, all of which were presumably written by Warren who also composed eight of the album's ten numbers.

Warren's wife, Dermel, lends her voice to half a dozen selections including two ("Yet Faithful," "Lost Friends") for which she penned the lyrics. Again, what she does is fine for the music as written, although it poses no real challenges; one's response to Dermel's singing will more than likely rest on his or her fondness for the recording as a whole. Warren welcomes three guests: Leon Marin (rap vocal on "Livin' Way Up"), pianist Andy Milne ("Battle with Steven") and tenor saxophonist Lenny Pickett ("J-Dubb's Step"). They're cool and steady, but none rises above the material at hand, which for the most part is unexceptional. As for other personnel, there's no comprehensive list but some names are provided for each number, which may or may not indicate the actual size of the group. The only name not listed is Warren's, and his presence is conspicuous on every track.

Having evaded so many hazards to arrive where he is, Warren undoubtedly had a game plan in mind for his first recording and accomplished what he set out to do. The import of his enterprise now lies in the ear of the beholder.

I Can Do All Things; Modern Warfare; Yet Faithful; Livin’ Way Up; You Got It; No Words Interlude; Lost Friends; Battle with Steven; Drummer’s Blues; J-Dubb’s Step.

Title: I Can Do All Things | Year Released: 2016 | Record Label: Self Produced