BY NENAD GEORGIEVSKI
May 14, 2016
Sign in to view read count 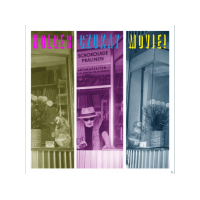 Undoubtedly, one of the most potent expression of German experimental music came from the band Can, a group of highly experienced composer-musicians formed in Cologne in the year of 1968. The band had a totally unique approach towards everything it created. Its music had its own basis from an ethnically derived rhythm section, tape collages and keyboards that was directed into a mix that nodded towards influences such as composers Stockhausen, Cage, Schaeffer, the Minimalist composers or bands such as The Beatles, Pink Floyd and Velvet Underground. Somehow, the blues or common rock influences were put to the background and new ideas have been put to the fore. It was music that evolved through constant improvisation and bold experimentation. And it was this attitude that the band's bassist and composer Holger Czukay had carried onto his own recordings when he left the band in 1977. When he left Can, he became the band's most successful member with the commercial success of the kaleidoscopic album Movies.

Printed on a white vinyl and renamed as Movie!, this is a wonderful reissue of a tremendously important, influential, and one of the most popular records in music history. Founded by singer Herbert Gronemeyer, who introduced the band Can when it was honorary awarded at the German Echo awards in 2003, the label Groenland records has been reissuing Czukay's past catalog, including rare items, which in most cases were long out of print. For a start, Movie! reflected Czukay's irreverent attitude to the studio and how he used short-wave radio samples, the dictaphone and extreme tape-splicing which has made him one of the first "sampling musicians" in rock. He was like a mad scientist who burned the midnight oil in his studio. What he took pleasure in, was to scan the global radio-waves for samples and strange sounds, and he combined them with live instrumentation and his own occasional singing or reciting. His fervent experimentalism saw him creating a kaleidoscopic array of sounds distilled into colorful collages that still makes people scratch their heads. With this combination of sounds juxtaposed together, even by today's modern standards he has managed to turn the familiar on its head.

Czukay was no stranger to creating strange sounding worlds on his records and an early example to that is the pre-Can release, Canaxis 5 with Rolf Dammers (Spoon, 1968). Canaxis 5 is an experiment in exotic sound collecting—electrically altered sounds mixed with Vietnamese, Tibetan, African and Indian music. Even on this early recording he proved that sampling can be art. Also, what his former band Can was known for at the start of its career was the soundtrack music they did. In a similar manner, this is soundtrack music, but for a non-existing film. Every song/composition here is a unique sound world where there are no divisions between musical genres as he seamlessly blends all kinds of sounds into the mix. From start to finish Movie! is an intriguing and often a humorous journey. Apart from the album's name and cover, its running order of songs is also different to the original. "Oh Lord, Give Us More Money" is a long and flowing collage of stuttering beats, web of cheerful guitars, keyboard riffs, and bits of sampled narration along with samples from films and television while "Hollywood Symphony" is another long composition that juxtaposes a web of guitars over orchestral flourishes and samples from films and television with a spry of breakbeats running underneath.

At the time, the album's first single was the funky and humoresque "Cool in the Pool" (renamed as "Cool Poll") which is a nod at Can's "I Want More." But instead of the original song what is here is the instrumental version which was first released as part of the 2006 reissue. It is a brilliant instrumental with a smirk on and one that shows the colorful instrumental foundation of the song and the main reason why Movie! is called "a record of 1000 edits." The omission of this track is a serious oversight and this reissue would have benefited more if the original track was present. A true highlight is "Persian Love," a song built around the chants of Iranian singers taken off a short-wave radio in contrast to lyrical pop consisting of Can-styled propulsive beats and sparkling guitars. It's a track that would pave the road for a myriad of artists who would sample ethnic sounds along with electronic music and the world music as a genre. Movie! does not feature any additional material like the 2006 reissue edition. An alternate take or work in progress would have added more to the significance of this re-release. What would have been nice if it had more information in the form of essays or an interview with Czukay of what would be a better presentation of this immensely important record.

And the effects of this record were immediate. Czukay has always thrived on many ideas such as the studio as an instrument, the risk of coming from a place with minimal options, ideas that would be influential on producer Brian Eno. This record was the chief inspiration for Brian Eno and David Byrne's seminal My Life in the Bush of Ghosts. (Nonesuch, 1981) Upon hearing this record David Sylvian became a believer and he invited Czukay to work together on a string of records in the '80s. Seminal records such as Beck's Mellow Gold (DGC, 1994) and Moby's Play (EMI, 1999) also owe a lot to this album's success. It also paved the way for the sampling culture and it prepared the ground for marvels in the world music genre which was about to bloom in the forthcoming decade.

Movie! is like a mosaic where all of its components add up to a picture that is greater than its parts. This record deserves the respect for its cross-pollination of the futuristic and the arcane, and it is a great example of a masterful assimilation through the prism of electronic music. By blending boundaries and cultures, Czukay has established a new vein of popular music that was fueled both by bold ideas and burning curiosity.