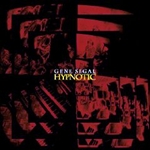 Born in Russia and raised in New York by immigrant parents, Gene Segal brings a defined presence along with some formidable skills. A one-time student of guitarists Scott Henderson and Joe Diorio, his voice encompasses a rock and blues aesthetic with impressive technique via his lessons with jazz masters Vic Juris and John Abercrombie. Yet preconceptions should be thrown out the door, because Hypnotic is a definitive debut of Segal's sharp abilities s a leader, composer, and performer.

The music is based on an organ-centric trio with Segal's band mates, drummer Matt Kane and keyboardist Sam Barsh. There's a raw edge to the trio's sound, which is augmented by a horn section on two tracks, as the musicians serve up a unique smorgasbord ranging from the title track's old school 1970s funk, some psychedelic rock on "Captain Chaos" and the tender narrative of "Quiet."

Although the ten tracks vary stylistically, the band's fun and loose energy is ingrained in the music. This is most evident in the groove-fest called "Alef," which puts down African rhythms, soulful horn vamps, Segal's nasty riff and some trippy keyboarding from Barsch. The swinging "Blues Again" is uncut bop, with grinding organ and a nice solo spot from Kane; it seems to be an obligatory jazz track, but again shows Segal's chops in almost any setting.

More compositions with the horns would have been nice, but the trio excels, in particular, on the slower pieces such as "Four Flights Up," with Barsch's delicate Pedal work and "Freefall," where Segal starts with a touching solo before the tune develops a lovely and affecting melody. Segal's playing on this tune is undeniable—pure, earthy and moving—and the added touch of his echo effects on the coda also mirrors a lingering sentiment to repeated listens of this enjoyable release.