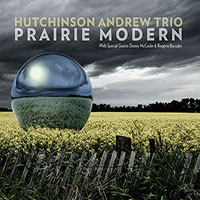 If Toronto, Montreal and Vancouver are the only places in Canada considered, in any way, as hotbeds for jazz, the prairie provinces are, with the exception of the annual Banff International Workshop in Jazz and Creative Music, pretty close to the bottom of the list of other Canadian cities that have small but aspiring jazz scenes. If anything, the Alberta-based Hutchinson Andrew Trio (also going by the name HAT) is clear evidence of not existing jazz scenes in Edmonton and Calgary, but damn good ones. Where pianist Chris Andrew, bassist Kodi Hutchinson are positioned in the food chain of their scene is uncertain, but based on Prairie Modern—HAT's third recording for Chronograph Records and first to feature drummer Karl Schwonik—it's hard to believe that they are anywhere but the top of it. This appropriately titled album may come from somewhere other than those cities considered to be Canadian jazz meccas, but Prairie Modern doesn't just position HAT as deserving of attention in its own country, but on an international stage as well.

Part of what makes Prairie Modern such a success—beyond the strong writing (largely by Andrew, with two tracks collaborative efforts with Hutchinson) and confident, compelling performances from the entire trio—is the appearance of saxophonist Donny McCaslin on six of the album's thirteen tracks. McCaslin spends enough time in Canada to almost qualify for citizenship, but his work here is as good as any of his collaborations with American artists like Dave Douglas, Joel Harrison or Antonio Sanchez, not to mention his own growing discography. McCaslin is nothing but consistent in the energy and commitment he brings to any project, moving effortlessly from a simmer to a burn in the Andrew/Hutchinson opener, "Mountain Rose," a lyrical gem that begins in a suitably pastoral space but ultimately turns up the heat when, after Andrew's more introspective solo, McCaslin reiterates its singable theme before diving in, with his characteristically potent tone in any register and wide open ears that pick up on everything from subtle piano gestures to more overt signals from Schwonik, all the while driving the trio to his own higher octane terrain.

But while Prairie Modern reflects the wide open spaces endemic to Canada's prairie provinces, that doesn't limit HAT from exploring other terrain, like the quirky "The Fog," a trio track whose quirky underlying riff is redolent of Chick Corea's Spanish-tinged work without being in any way imitative. An unexpected set of sophisticated harmonies act as the foundation for a drum solo that quickly builds to a place of breathtaking power reminiscent, in its way, of Antonio Sanchez, before leading to Hutchinson's first solo of the set. The bassist cites Ray Brown as a seminal influence, but if his solo here is recalls anyone it's the spare, melody rich Charlie Haden, a Midwesterner whose own connection to music across the central part of North America is well-documented.

HAT's other guest on Prairie Modern is New York-based percussionist Rogerio Boccato (Kenny Garrett, John Patitucci, David Binney), and while he brings a wealth of delicate textures to the elegant, Latin-esque "Ponderado"—a quintet track that also features McCaslin on soprano—he gets a brief but significant a cappella feature on the 52-second "Ponderado Intro" that precedes it. The music may be played with an ear to open spaces that is perhaps a consequence of HAT's location, but McCaslin once again brings some edge to the piece, setting the context for one of Andrew's most impressive solos of the set.

There are hints of Asia ("Prairie Wind") amidst fiercely swinging explorations from McCaslin and Andrew, bolstered with incendiary energy by Hutchinson and Schwonik ("The Realm, Pt. II"); deeper complexities ("What Next") positioned next to a gorgeous duo interlude featuring Andrew and Boccato ("Mintaka"); and a chance to explore darker terrain, with Hutchinson delivering his best solo of the session ("Beautiful Thom"), leading to an ending of unexpected subtlety and beauty, with Andrew and Hutchinson alone together ("Essence of Peace Beauty & Life"). Throughout, with and without guests, HAT proves itself a trio with a finely honed approach and a voice that's already been recognized beyond the prairies at the Festival International de Jazz de Montréal, where it won the 2013 TD Grand Jazz Award. If Hutchinson Andrew Trio continues to make records like the easy on the ears but undeniably deep Prairie Modern, it's hard to imagine anything but greater recognition for this world class group from the west side of the prairies.