By BUDD KOPMAN
January 8, 2017
Sign in to view read count 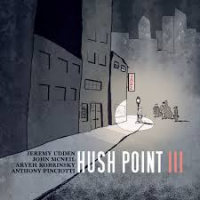 Trumpeter John McNeil is a real trooper, battling and overcoming much physical adversity, but nevertheless engaging in long-term projects such as the group Hush Point. Joined by saxophonist Jeremy Udden, with Aryeh Kobrinsky on bass and Anthony Pinciotti on drums, McNeil's somewhat idiosyncratic sense of humor (musical and otherwise) is on display, as is his desire to forge a true group sound and aesthetic.

The group's marvelous, and purposefully underwhelming third release Hush Point III is full of so much humor combined with seriousness of purpose and high musicianship that it can be played over and over and continue to surprise and shock in its own underhanded and subversive way (the earlier two are Hush Point and Blues and Reds). You can get a good feeling for Hush Point's unique attitude here.

As stated in the review of McNeil's 2006 release East Coast Cool, the best jazz has a subversive quality about it, coming from the direct connection of player's heart and soul with the listener, rather than mere "jazz" stylings. McNeil would much rather speak softly, even whisper rather than shout, and in this endeavor has found the perfect partner in Udden.

Udden has paid his dues, notably in Russ Gershon's Either/Orchestra (see Ethiopiques 20: Live In Addis) and possesses one of the most beautiful saxophone sounds in the business (think Paul Desmond). Gershon had the same kind serious- tongue-in-cheek attitude as McNeil and Udden seems to have the same kind of outlook. As an interesting aside, Udden has added the C-melody saxophone to his arsenal, evoking the memory of Frankie Trumbauer, and gets top billing on the musician listing.

In any case, Hush Point's highly refracted, personal and extremely tight brand of mainstream, accessible music, presented by the dry and transparent recorded sound is completely engrossing from beginning to end. There is structure, harmony, swing within arrangements both fixed and flexible, and the record sounds like a live set.

The music is hip, very, very ironically cool and just plain fun while being deeply thoughtful, from the originals, (mostly McNeil, but also Udden's "Azmari Bar" and Kobrinsky's "It's A Pocketbook") to a fantastic performance of the beautiful standard, "More Than You Know," which is in the middle of a natural sounding suite of three tracks.

Hush Point III, whatever label is applied to it, is simply excellent music making.