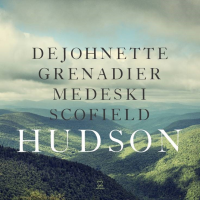 Rightly vaunted as a 'supergroup,' specifically in the Tony Williams Lifetime mold, this eponymously titled band really does qualify as a super quartet, so much so that any background information on these four protagonists would seem superfluous. However it should be noted that John Scofield and John Medeski have teamed-up on occasion with Medeski, Martin & Wood and Scofield and Jack DeJohnette first played together forty years ago and more recently in their Trio Beyond with organist Larry Goldings.

What is perhaps different with this album is around half the tracks are popular numbers from the greats days of the Woodstock and beyond. The remaining half comprises originals. Fittingly, the group first played a gig together at the 2014 Woodstock Jazz Festival and the vibe that they experienced then encouraged them to pursue the project, culminating in this record. The quartet's name is inspired by the beauty of the Hudson River from which Woodstock is but a few miles away, indeed virtuoso bassist Larry Grenadier is himself a resident of the Hudson Valley.

The opening, groove-laden title track certainly displays influences of Lifetime and early Seventies electric-period Miles Davis too. The longest track at nearly eleven minutes, it offers kaleidoscopically mesmeric performances with Scofield even inserting a cheeky quote from "The Peanut Vendor." Things settle down a little with Scofield's "El Swing," the Iberian-influenced head leading into the guitarist evincing some biting, fluid soloing.

The covers of Bob Dylan's "Lay Lady Lay" and Joni Mitchell's "Woodstock" are given respectful treatments, the former with Scofield carving out the melody with bright-toned guitar, the latter, emotionally-charged and instantly reminiscent of the Crosby, Stills, Nash & Young version.

At nearly ten minutes, Dylan's "A Hard Rain's A-Gonna Fall" undergoes a transformation. The melody is dispensed with early on although briefly repeated at the end. In between is a melee of spacey sound, dominated by Medeski's Hammond B-3 channelling the late Larry Young. On "Wait Until Tomorrow" from Axis: Bold As Love, Scofield absolutely cracks Hendrix's tone and attack. DeJohnette's elegiac "Song For World Forgiveness" conjures-up the spirit of Woodstock, abounding with Scofield's glissando-rich guitar. DeJohnette provides the vocals to "Dirty Ground," the song he co-wrote with Bruce Hornsby and which appeared on his 2012 album Sound Travels. Scofield's straight ahead "Tony Then Jack" is a paean to the late Tony Williams, its title carrying the implicit message that DeJohnette is the natural successor to Williams.

This immediately accessible album is undoubtedly going to make waves and make jazz a lot of friends even outside of the jazz fraternity. The quartet combines unique skills and powers of invention to create over seventy minutes of fascinating interpretations and solid originals. As a group, they sound like they've been playing together forever and the music just seems to flow effortlessly, just like the Hudson.