John Surman: How Many Clouds Can You See? 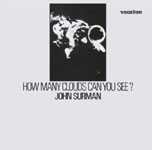 While woodwind multi-instrumentalist John Surman's eponymous debut was a strange mixture of everything from free improvisation to calypso, his second date, 1970's How Many Clouds Can You See?, is a much more focused affair. Surman clearly references one of his roots, John Coltrane, albeit on an instrument that the legendary saxophonist never played.

Surman plays bass clarinet and soprano saxophone, but the baritone has always been his main axe. Here he uses it to put a personal spin on music inspired by the latter-period Coltrane's visceral and sometimes almost anarchistic approach. Few artists are capable of pushing the baritone to the forefront, but Surman's ability to extend beyond the conventional range of the instrument has made him a reference point for many to follow.

The album mixes a duet, two quartets and one 12-tet; the fifteen-minute "Galata Bridge" combines tumultuous interaction and rallying form for an octet featuring the rhythm section of pianist John Taylor, bassist Barre Phillips and drummer Tony Oxley (who appear on all but one track). There's plenty of extreme improvisation, but arranged passages and shifting rhythms demonstrate Surman's already well-developed compositional acumen.

Shorter and more tightly arranged, saxophonist Peter Warren's "Premonition" is the only non-Surman composition here. It represents the beginning of a collaboration documented on the 1971 Surman/Warren release Tales of the Algonquin (Vocalion, 2005) and The Brass Project (ECM, 1993). The tune, a solo vehicle for Taylor, also demonstrates Oxley's uncanny ability to swing in the most unconventional of ways. Oxley would ultimately evolve into a more textural and open-ended player, but even with the unequivocal pulse found here and on parts of "Galata Bridge," Oxley's polyrhythmic approach to displacement ensures regular unpredictability.

The spirit of Coltrane is felt throughout the disc, but Surman is a more economical (though equally passionate) player. "Caractacus" revolves around a brief motif before heading into a fiery duet between Surman and drummer Alan Jackson. The two imply a broader context so well that one can almost hear a larger ensemble in their performance.

The eighteen-minute, three-part "Event" is the highlight of the disc. Though it's ostensibly a quartet piece, Surman layers his horns to enhance the texture. The attention to space in the first section foreshadows the leader's future association with ECM. Still, the centerpiece of the "Event" is a modal burner reminiscent of Coltrane's classic Tyner/Garrison/Jones quartet. After a powerful solo from Oxley, the group comes out swinging, but in the loosest possible way. Taylor's accompaniment provides a notable contrast to the more impressionistic space he now occupies.

More than Surman's debut, How Many Clouds Can You See? is the record that really put him on the map. Kudos to Vocalion for making this inspired session once again available.

Galata Bridge; Caractacus; Premonition; Event: (a) Gathering; (b) Ritual; (c) Circle Dance; How Many Clouds Can You See?

Title: How Many Clouds Can You See? | Year Released: 2007 | Record Label: Vocalion