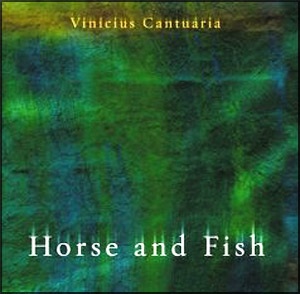 Both stylistically and musically impressive, Brazilian guitarist and singer Vinicius Cantuaria's new recording, Horse and Fish, represents a smooth combination of ethnic pop vocals, bossa nova rhythms and jazz elements. A popular icon in the "world music" arena, Cantuária joins the ranks of other esteemed Brazilian performers like Antonio Carlos Jobim, Flora Purim, Eliane Elias, and Moacir Santos. While the soul of the new recording carries a rich musical tradition, it also proclaims Cantuária's modernistic view, which has been witnessed in his past associations with artists like David Byrne, Bill Frisell, and DJ Spooky.

The recording captures what Cantuária calls "post-electronica acoustic" with instruments ranging from natural percussion to synthesized sounds. Cantuária's rich Brazilian vocals provide the ambiance as he sings with an almost minimalist approach with hushed tones and enticing lyrics. His skills on guitars (both acoustic and electric) as well as percussion are significant as he leads an equally proficient band.

One of the jazz influences that come to mind is Miles Davis's muted horn sound, brought by trumpeter Michael Leonhart on the opening selection, Gilberto Gil's "Procissao," which is redone with synthesizers and turntable effects. Acoustic pieces like "Quase Choro" have both Old and New World tendencies. Cantu'ria's vocals are splendid on the samba chilled "O Barquinho."

While some selections, such as "Look to the Sky," would seem almost too romanticized, the group overcomes with stellar music. There are simply some beautiful cuts, such as "Perritos," where the music and Cantuária's voice find an exquisite balance. The scope of varying moods covers the dance groove of "Cubanos Postizos," the dark melody of "Tokyo," and the seductive call of "Ligia." For exotic Brazilian music with a contemporary bend, this new recording adds a fresh presence.

(The CD also contains a bonus Quick Time video of a live performance of Cantuária and his band at the Tonic jazz club in New York City.)

Visit Vinicius Cantuária on the web.