Handicap or no handicap, if the music weren’t terrific, there would be nothing to talk about. And it is terrific. 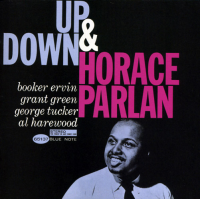 I have a new hero: Pianist Horace Parlan. Until recently, I had heard of Parlan, but never really heard him. I certainly never knew his back story. It's inspirational—and his music is pretty damn good, too.

Parlan had a handicap. As a child, he lost some function in his right hand due to polio. Various bios disagree on the extent of the loss. Some say two fingers, others three. Either way, it's the kind of injury that makes a career as a pianist sound impossible.

Yet Parlan found a way to compensate —something to do with developing a powerful left hand. In any event, he had a long, successful career as a bop pianist. Of course the music stands on its own, regardless of how it's made. Handicap or no handicap, if the music weren't terrific, there would be nothing to talk about. And it is terrific. (For example, catch him on Charles Mingus' 1959 classic Mingus Ah Um.)

Up and Down, a 1961 bop-and-blues album, is the perfect introduction to Horace Parlan. It features three remarkable solists: Parlan on piano, Booker Ervin on tenor, and Grant Green on guitar. Together, they make wonderful, swinging music that borders on soul-jazz.

While some pianists made their names with jaw-dropping speed and technique—think Art Tatum or Oscar Peterson —Parlan (by necessity or choice) goes the other way. He is wonderfully inventive. At times, he sounds almost Monk-ish, choosing unusual chords and odd notes. On every tune, without exception he is soulful and bluesy.

Grant Green, of course, is tasteful, as always. Like Parlan, Green does not amaze with lightning-fast runs. Instead, he wrings the blues for every drop of emotion he can find, including the quiet spaces between notes. He is the perfect complement for Parlan.

Finally, there's Booker Ervin. Unlike Parlan and Green, Ervin can shred with the best. On Up and Down, he turns it on and off. On the opener, "Books Beat," Ervin is sassy and aggressive. On the ballad "Lonely One," he is all swirling smoke. And on the closer, "Light Blue," Ervin shows off his technique—a toe-tapping, happy blues that sends the listener off with a smile.

Up and Down is a great ensemble album. It's full of clever, swinging music. I could listen to it all day. And while you don't need know anything about Parlan's bum right hand to appreciate the music, it helps. The man is an inspiration.

Availability: Plenty of used copies, but nearly all the new CDs are from overseas

Cost: $4 used, $9 in MP3, more expensive if you get a new Japanese import. Or, if you must, there's the cheapo European box Seven Classic Albums for just $14.