The Ayn Inserto Jazz Orchestra: Home Away From Home

By BUDD KOPMAN
November 2, 2015
Sign in to view read count 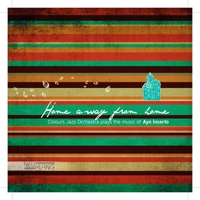 Composer and band leader Ayn Inserto's path leading to the release of the marvelous Home Away From Home is actually circular. Italian trombonist Massimo Morganti was studying at Berklee, when he heard a performance of Inserto's orchestra featuring tenor saxophonist George Garzone and trombonist Bob Brookmeyer (with whom she studied for two years as her mentor). Returning to Italy, he decided to create a similar orchestra the Colours Jazz Orchestra, in 2002 which ultimately put out Nineteen Plus One featuring Kenny Wheeler.

A few years later, Morganti invited Inserto for a series of workshops with the Colours Orchestra. For whatever reason, a strong bond was formed, resulting in the set of pieces on the album at hand. While Morganti does write and arrange music for Colours, he many times arranges for guest composers to work with the band, but Inserto somehow feels especially connected.

Anyone familiar with Brookmeyer's arranging style will hear his influence on Inserto, but she definitely is her own person. A taut energy that runs through every measure gives the music a lean, light quality even during the densest passages. Her music has a power which sweeps everything along with it, but this power is that of an orchestra, and is quite different than that, say, of John Fedchock, which is unapologetically a big band.

Comparing the compositions on Home Away From Home with those on Inserto's own orchestra's 2009 album Muse show a identifiable stylistic connection. But there is something special going here with Morganti and the Colours Orchestra that is hard to pin down. Perhaps it has something to do with the orchestra's Italian heritage that connects with litheness of Inserto's music, which, however, sounds almost nothing, except for some little touches here and there, like the soundtrack of Il Postino that oozes Italy.

In any case, the seven tracks presented here are individually superb, both in conception and performance. "La Danza Infinita," which is the longest track and the centerpiece of the album, is aurally ravishing, sadly beautiful or perhaps beautifully sad, with its deep emotion captured by Morganti's superb solo which starts about half-way through.

Leading up that, the opening track, "You're Leaving? But I Just Got Here" could not be more different, entering on cat's paws (or is it panther's paws?). Playful, but powerful, this crystalline music is sharply played by the band. On the other side of "Danza" is "Down A Rabbit Hole," which has such tightly controlled energy as to be hair-raising.

When all is said and done Inserto has an original voice, and her personality comes through regardless the particular style of any specific composition. When matched with the Colours Orchestra, the result is almost overwhelming. Bravissimo!

You're Leaving? But I Just Got Here; Recorda Me; Hang Around; La Danza Infinita; Down A Rabbit Hole; Wintry Mix; Subo.