Matthew Shipp Quartet: Our Lady Of The Flowers

BY JOHN SHARPE
November 2, 2015
Sign in to view read count 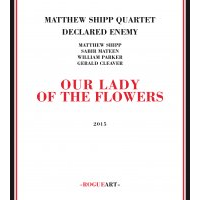 Our Lady Of The Flowers, titled in homage to French writer Jean Genet, constitutes the second disc by Declared Enemy, a familiar foursome convened by pianist Matthew Shipp. That association apart, the participants share a lot of history together. As a result they move like a finely tuned machine with well oiled parts through a program of nine selections credited to the pianist, but which sound like group inventions.

And those parts are magnificent. Drummer Gerald Cleaver creates a chattering pulse fashioned from interlocking lines from disparate elements of his kit, while bassist William Parker majors on ferocious momentum, leavened by the occasional melodic serenade. Shipp propounds his utterly distinctive style, with nagging motifs prominent, though he reins in his customary explosions. Rounding out the ensemble on reeds, Sabir Mateen generates a palpable emotional charge through his surging forays into the altissimo registers.

In a trope familiar from other sessions, Shipp varies the instrumentation between tracks, resulting in five full quartet numbers, one trio, two duets, and one solo. Parker engages in the knotty "Silence Blooms" unaccompanied. On "New Tension" the dynamic becomes more conversational, as the quicksilver duet between Shipp and Mateen's clarinet is by turns ethereal, querulous and relaxed. But that's not the only game plan in play. Elsewhere a slightly different approach manifests, such that in "Irrational," the duet between Shipp and Cleaver resembles a pair of parallel monologues.

It's a choice borne out of experience rather than any deficit of communication. And one that makes this a raw yet sophisticated performance in which no-one worries unduly about matching or mirroring. The consequent sense of creative dissonance pervades the album. Even though the quartet pieces tend to be dense everyone proves adept at allowing enough space for each other without compromising their own direction. Listen to Shipp behind Mateen on "Atomic Note." Comping doesn't get anywhere near describing the complexity of what the pianist is doing, let alone considering Cleaver and Parker's contributions.

Mateen himself generates an exciting fluent stream of consciousness, into which he sometimes interjects practiced blues inflected licks to relaunch his exhortations, as on the choppy dancing "Gasp." A lovely moment ensues on the ballad like "A Different Plane" when, after his breathy vibrato laden tenor vies in spirited dialogue with Shipp's piano, he enjoys a falsetto passage which finally tumbles down through the treble clef.

"From The Beyond" begins as a tête-à-tête between Parker's arco and Mateen's tenor, before the bassist's urgent sawing is picked up first in a drum tattoo, and then by Shipp's pummeling which ignites the saxophonist into a powerful incantation. The piece ends with an extended drum and bass repeat, until finally Parker's bowing sees out the cut alone. It's just one example among many of the potent full on free jazz which characterizes this date.

Atomic Note; New Tension; A Different Plane; From the Beyond; Silence Blooms; Irrational; Our Lady of the Flowers; Gasp; Cosmic Joke.