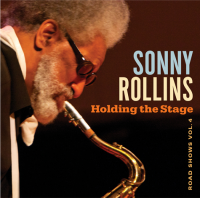 The day may come when the well runs dry, but that day is not upon us. The fourth installment of Sonny Rollins' Road Shows series has arrived, bringing more beauties from the archives to light while bearing out that the genius of the Saxophone Colossus is best demonstrated on the stage. That's where the magic has always happened for him, and that's why these offerings have been so well-received. The first three volumes are already considered to be indispensable items in the storied Rollins canon, and this one stands to join them.

The selections on Holding The Stage: Road Shows, Vol. 4, as with the entries on each album in the series, were all hand-picked by Sonny Rollins' toughest critic: Sonny Rollins. He pored over recordings from his past—a torture, no doubt, for somebody as notoriously picky about their own playing as Rollins—and came up with ten numbers that measured up to his standards. The material spans more than three decades, quite a few lineups, and a good number of styles. The common thread is the musical giant in the middle of it all, taking risks and going where he pleases. He never disappoints.

The album opens on a Rollins concert staple—Duke Ellington's "In A Sentimental Mood," recorded in 2007 at the Barbican in London. Halfway through this enthusiastic five-minute performance, Rollins jettisons the band and proceeds to rhapsodize on the form and theme(s), zigging where you expect him to zag and ornamenting the familiar melodic strains in inimitable fashion. It's a song he's probably played a thousand times, but that doesn't dampen his enthusiasm or stunt his originality one bit.

Over the course of the nine numbers that follow, Rollins travels back in time and takes us to some very pleasurable places. He makes a stop in Marseille in 2012, gleefully laying it down over a backbeat on his own "Professor Paul"; he visits Prague in the same year, where an incredibly brief yet utterly complete duo performance of "Mixed Emotions" finds him melding spirits with guitarist Saul Rubin, operating with a little sandpaper in his sound, and giving off plenty of heart from his horn; he journeys to Paris in 1996, where he comes on like a gladiator after pianist Stephen Scott throws down the gauntlet on a swinging "Keep Hold Of Yourself"; and he travels to Pori, Finland, in 1979, where signs of the times and the sounds of The High Priest of Bop merge on "Disco Monk." Each stop on the trip is a blast from the past just beginning to have its impact felt in the present.

The second half of the album, save for a 2006 take on the bluesy "H.S.," sets its sights on Boston's Berklee Performance Center on September 15, 2001. That's where Rollins, mere days after experiencing the terrors of 9/11 up-close, hunkered down and bared his soul. That concert birthed one of his strongest latter day statements—Without A Song: The 9/11 Concert (Milestone, 2005)—and these previously unreleased tracks serve as a fitting coda to that chapter of his life and career.

After hearing this material, one can only assume that concerns about running time and/or sound quality kept it off of the aforementioned album. Rollins' wonderfully bluff and bruised reading of "You're Mine You" is as good or better than plenty of songs that made the cut. The same can also be said for the breezy "Sweet Leilani," a waltz to dream by that opens the album-ending medley and includes a smile-inducing, self-referential quote in the form of "Alfie's Theme." The two selections that follow and fill out the medley are marred by sound issues. Something is amiss with the microphone during Rollins' unaccompanied solo, creating some mild distractions during that herculean display, and "Don't Stop The Carnival" sounds like it was taken from a different audio source—a bootleg recorded from a distance. Those issues are unfortunate, but easy to overlook in the grand scheme of things. I'll take gold with subpar sound over pristinely recorded pyrite any day, and so will most. This album is another huge win for jazz lovers the world over, demonstrating, once again, why Sonny Rollins is in a class all by himself.

In A Sentimental Mood; Professor Paul; Mixed Emotions; Keep Hold Of Yourself; Disco Monk; You're Mine You; H.S.; Medley: Sweet Leilani, Solo (Rollins only), Don't Stop The Carnival.