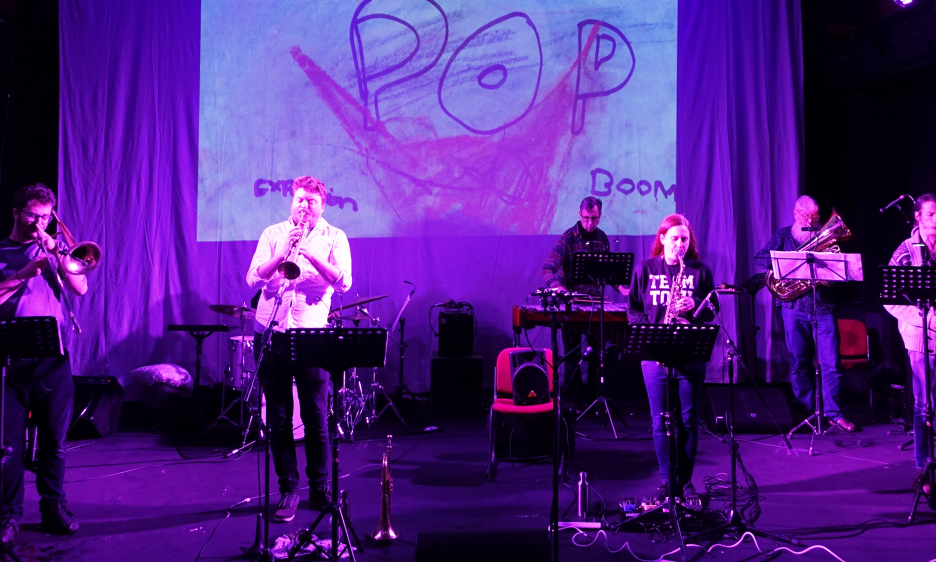 With the UK slowly reopening as the vaccination program diminishes the reach of Covid 19, live performance once more becomes a possibility. Major kudos to the Norfolk & Norwich Festival team for pressing ahead with live programming of not just this event but much of the rest of the two-week-long annual festivities, albeit with reduced, socially distanced audiences for indoor spaces. So it was that an eagerly awaited double header presenting some of the UK's most exciting improvisers touched down in the salubrious surroundings of The Garage in Norwich.

First on the bill was Holding Hands, an octet led jointly by trumpeter Chris Dowding (Hymn, Sylvia & I) and reed player Rob Milne, which blended electronics and samples, clattery grooves and lush enveloping melodies. To begin, a virtual hubbub of indistinct crowd noise filled the auditorium, courtesy of Mark Howe's laptop before being joined by Ralph Clarkson's trombone glissandos. In a characteristic move, they were gradually subsumed into opulent Ellingtonian chords by the rest of the band. A martial cadence ensued from the percussive axis of drummer Andrew Lisle and vibraphonist Martin Pyne, before taking on a dirge-like swell, buoyed by Ben Higham's tuba and the collected horns. A series of solos followed: careworn trumpet from Dowding, acerbic alto saxophone from Dee Byrne, then later a bubbling tenor outing capped with falsetto wails from Milne, as the backing billowed below.

One of the most striking passages came when Howe looped a disembodied voice, talking about the ice sheet falling into the ocean, which was mirrored syllable by syllable by first Clarkson's trombone, then others, while the vibes cut free in a welter of off-kilter chiming. Underpinned by a heartbeat throb, Howe switched to a different sample and the original effect was repeated, this time with the voice shadowed by Milne's bass clarinet.

The underlying subject matter was no coincidence. At the centerpiece of the set was "Critical Time," a work concerned with borders, landscapes and climate change, developed in conjunction with pupils from a school nearby Thetford (birthplace of Thomas Paine, one of the inspirations of the American Revolution and the author of the seminal Rights Of Man). Played against a backdrop of the children's artwork, the four-part work constituted another highlight, less tightly structured, allowing greater improvisational leeway, with uneasy accompaniment, well exploited by Byrne's twisting fractured alto, and later by Dowding's incisive pocket trumpet. In a favored gambit, an elegiac unison progressively absorbed the horns, which, when it stopped, left just a chill electronic wind whistling around the hall. A fitting end to music which provoked thought as much as pleasure.

After the interval it was the turn of Article XI, an eleven-piece (yep!) outfit, punningly named after the section of the European Convention of Human Rights which deals with the right to freedom of assembly, including forming and joining trade unions, under the direction of guitarist Anton Hunter. It's an outfit founded on the considerable improvisational abilities of its members. But Hunter (who takes a leading role in Cath Roberts' Slothracket) wisely provides varied and engaging arrangements, reminiscent of some of Ken Vandermark's large-group works, within which everyone can express themselves without resorting to the default blow-out. The opening "Retaken" offered an echo of Holding Hands with its introductory hymnal over a gently rolling pulse, but became more wayward as space opened up for Alicia Gardener-Trejo's baritone saxophone blurts and murmurs, vying with Seth Bennett's double bass sawing and tapping. Splutters and rasps from across the stage steadily cloaked the baritone in a seething polyphony, before the piece exited in the guise of an exuberant stomp.

Most of the numbers performed this evening came from the unit's two albums, its eponymous debut (Efpi Records, 2018) and Live In Newcastle (Discus, 2020). Hunter explained that he created the charts by asking the constituent musicians to record themselves improvising in response to the written material, and that he then assembled together the best bits. While his tongue was likely firmly in his cheek, it did help explain the satisfying way in which he meshed together some unfettered and spirited improv within the loose-limbed arrangements, which involved subsets of the group, cued ensemble interventions, layered textures and spiky beats.

Other high points included the initial fluttering swirly duet between Dee Byrne's alto (busy night for her) and Simon Prince's kinetic flute on "Always A Fox," the subsequent threesome of the leader's sparse guitar, Graham South's pinched yet melodic trumpet and Kieran McLeod's trombone exhalations, then finally a lovely timbral detail from drummer, brother Johnny Hunter as he attenuated the scrape of stick across cymbal at the close of that same piece. Also notable was Oliver Dover's vibrato-laden alto saxophone extravaganza as he sparred with trombonist Richard Foote on the memorably named "I Dreamed I Spat Out A Bee" before they were engulfed in a braying crescendo of reeds and brass in an excellent finale to a concert which could have productively gone on for much longer, given the talent amassed onstage.