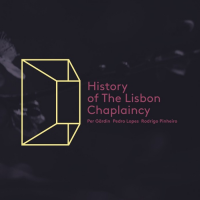 It's interesting just how much place influences a recording. Was the session captured in a hermetically sealed studio or a noisy jazz club? Is the sound engineered or merely captured? And how does the architecture of the recording space effect the sound? Sound experimentalist Pauline Oliveros often recorded in an empty water cistern, timing notes against the ping-pong reverberations. The trio of Per Gärdin, Pedro Lopes, and Rodrigo Pinheiro recorded with what can only be described as their fourth member, St. George's Church, which was consecrated in 1889. To be more specific, the church holds the Fincham Pipe Organ, which plays a major role here.

Rodrigo Pinheiro sat at the keyboard of the mighty organ. He is probably best known as the pianist for the acclaimed Red Trio and has recorded with John Butcher and released Oblique Mirrors (ibnmusik, 2015) with Gärdin. Per Gärdin's saxophone immediately calls to mind Evan Parker's Whitstable Solo (psi, 2010) recorded in the UK's St. Peters. However, it may recall the sound of John Lurie, the mastermind of the 80s/90s Downtown sound, even more. The third member (or fourth, depending on your math) is turntablist Pedro Lopes.

Their concert, captured in this single 43 minute track, has an otherworldly quality. Not so much spiritual, as supernatural, with Gardin's saxophone taking flight with the sound of bird calls, and Pinheiro's organ resounding like the wind carving out caverns. The addition of Lopes' turntable isn't so much sampling as it is percussive and a drone generator. The entire performance is not unlike a futuristic arboretum or sanctuary for robots. A dream Philip K. Dick once had. Highly recommended.

History Of The Lisbon Chaplaincy