BY TROY COLLINS
October 8, 2009
Sign in to view read count 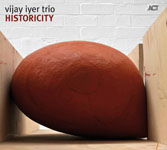 The art of the piano trio has enjoyed a healthy renaissance over the past two decades, as a plethora of new stars have ascended the ranks to uphold and advance the tradition. Ethan Iverson, Brad Mehldau, Jason Moran, and Matthew Shipp are just a few of the adventurous younger artists whose notion of the trio is anything but staid, yet firmly linked to the hallowed format's core principles of intimate three-way communication.

Add to this short list Vijay Iyer, whose first proper trio record, Historicity, places him squarely in the company of his peers. As the leader of a visceral post-M-Base quartet featuring alto saxophonist Rudresh Mahanthappa, bassist Stephan Crump, and drummer Marcus Gilmore, Iyer has occasionally embarked on brief trio excursions with Crump and Gilmore before, but never for an entire recording session. Serving as his rhythm section since 2005's Reimagining (Savoy), Crump and Gilmore's studied rapport belies the underlying complexity of Iyer's oblique structures and unorthodox arrangements, providing this date with graceful concordance.

The trio embraces a multitude of techniques to realize the subtle timbral differences of each song. Crump's pliant pizzicato and resonant arco expand the trio's sonic palette with sinewy muscularity, while Gilmore's polyrhythmic fusillades add layers of temporal intrigue. Iyer reveals a variety of approaches, from blinding chromatic runs and hypnotic arpeggios to spacious introspection, sometimes invoking all in the space of a single tune.

Much has been written about Iyer's academic background (he has a B.S. in Mathematics from Yale, a Masters in Physics and a Ph.D in Technology and the Arts from U.C. Berkeley) and how it informs his intricate writing. Despite their complexity, Iyer's compositions never sound contrived or excessively cerebral. The four originals are demonstrative, incorporating dynamic shifts in tone, modulating time signatures, and interlocking counterpoint—yielding congenial three-way conversations that balance stunning virtuosity with emotional conviction.

A brave step forward for Iyer as an improviser and interpreter, Historicity is a vibrant and thrilling piano trio record by any measure.