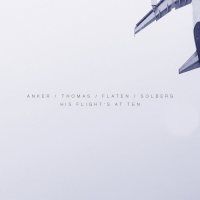 Perhaps the title refers to British pianist Pat Thomas' travel schedule. If so it will be a situation that he is all too familiar with, as strangely his reputation appears greater in Europe than at home, in spite of an extensive discography and collaborations with a who's who of contemporary experimental music.

His Flight's At Ten presents him in the company of three stellar Scandinavian improvisers on a set recorded at the 2016 edition of Oslo's Blow Out! festival. For this occasion Thomas forgoes electronics and confines himself to the piano for three slabs of predominantly high energy free jazz collectively generated with Danish saxophonist Lotte Anker, and the Norwegian pairing of bassist Ingebrigt Håker Flaten and drummer Ståle Liavik Solberg.

Pitching Anker's anguished slowly twisting split tones against the furious tumult spawned by rampaging piano, bass and drums proves an especially successful gambit, and one which happily recurs throughout in various guises. Of course if that were the only mode of expression the thrill would pall very quickly. In fact it forms but one part of the peaks and troughs they restlessly traverse, realized by means of well-judged spontaneous transitions, like the one during "Departure." Here following a passage of sparse timbral exchange, a lilting momentum develops conjured from near lyrical alto saxophone and jagged piano counterpoint, which speaks of a palpable connection between Thomas and Anker.

At other times a percussive approach unites Thomas with Flaten and Solberg. That becomes particularly apparent at the beginning of "In Flight" during the stop start pulsations of twanging pizzicato, kitchen sink clatter and lurching off-kilter piano. Thomas draws on the tradition from Thelonious Monk through to Cecil Taylor, while remaining his own man, as the quartet reach some surprisingly jazzy moments. After all the heady interaction, the concluding "Arrival" displays a restrained focus, illuminated by a sparkling duet between piano and bass, where Flaten's fleet upper register plucking seems to channel the virtuosity of Scott LaFaro.

Four searching, adventurous voices, each with something to say, combine to create a bracing and stimulating listen.