BY ROBERT MIDDLETON
November 1, 1997
Sign in to view read count 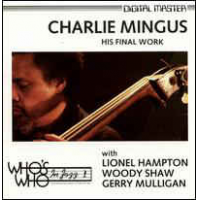 Like a dog that loves a fire hydrant, my ears love Mingus. I bought both of these some time ago but have been going through a Mingus phase and realized I had only played them once or twice. They are both treasure troves of classical American jazz at its finest. Make no question about it, Mingus was deadly serious about his music. For him, improvisation never meant "anything goes." On every composition, he left an indelible stamp—whether a sorrowful ballad like "Vassarlean," on Soulful or an up-tempo romp like "Slop," on Final.

Mingus' had more dynamic interplay amongst the musicians -and the more horns the better -than anyone else in Jazz (with Ellington being the notable exception). Dannie Richmond, on drums, played with him steadily for 20 years or so. Can you fathom that? Can you imagine the telepathy they must have developed? He loved certain phrases and would twist and turn them, often transforming them into new compositions, and then sometimes confusing us by renaming old compositions and changing them a little. He recorded some songs several times, each a little different, always fresh and inventive.

On Soulful, a collection of some of his best Candid sides, he teams up with Roy Eldridge, Tommy Flanagan and Eric Dolphy on three of the most memorable pieces -each a masterpiece. Check out Dolphy's swinging solo on Mysterious Blues. On Final he plays with a 10 piece band that includes Woody Shaw, Gerry Mulligan and Lionel Hampton. Each are afforded ample solo space. This is a bright, fun album, quite unlike anything he'd attempted previously. Produced by Lionel Hampton and arranged by Paul Jeffrey it's not quite as loose or intense as much of Mingus' output, but the big band sound, Lionel's solos and the overall upbeat feel makes it fitting that it was the last recording Mingus actually played on. (He led a couple other recording sessions, but did not play.) Nothing Mingus recorded was bad or dull. Some was a little uneven. Some was wildly passionate. And some was just plain great jazz. And that's what these two albums are -Great Jazz!

Robert is the founder of Action Plan Marketing and a a serious jazz addict.