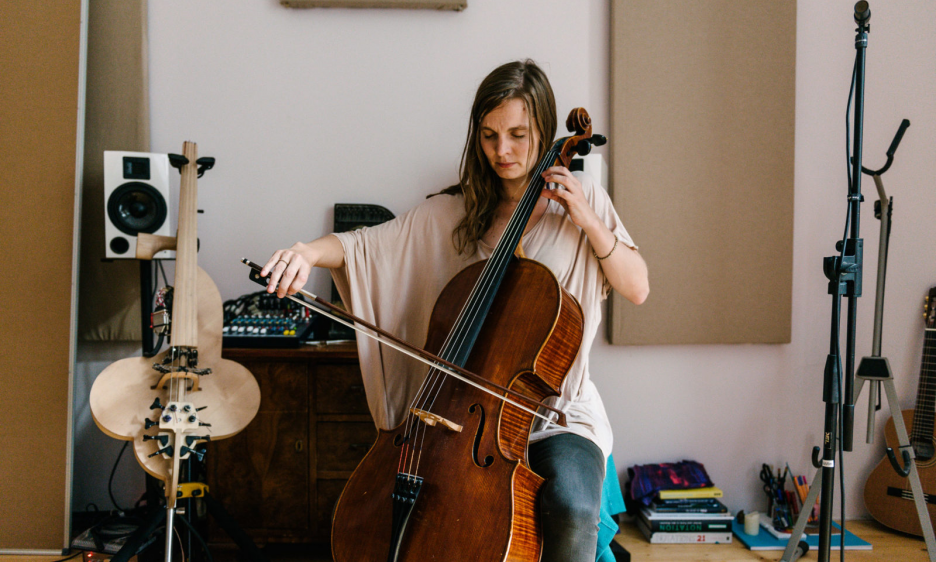 By NENAD GEORGIEVSKI
October 15, 2019
Sign in to view read count
Musician and composer Hildur Gudnadottir has spent the past decade creating some of the most unique and indelible music and film scores in modern memory. Much like her fellow Icelanders Jóhann Jóhannsson and Ólafur Arnalds, Gudnadóttir has been composing weighty and layered ambiances and soundscapes. Her solo work obliterates the line between contemporary classical music and improvisation thus sculpturing spontaneous inventions into mesmerizing and brooding compositions. Her arsenal is the cello called "omar" which is a prepared cello combined with electronic effects. With it she weaves together layers of sound, including lush and melodic elements, pulsing rhythms, and spectral atmospheres. After beginning her music career as collaborator to bands and artists of different profiles and genres like Pan Sonic, Throbbing Gristle, Animal Collective, Sunn O))), Hauschka, to name but a few, she has produced several ambient albums of her own. Gudnadottir got her start in film music by collaborating with composer Jóhann Jóhannsson and played cello on most of his film scores, including Sicario and Arrival. She even worked with him on his last score as co-composer on Mary Magdalene. Several years after working as cellist on the Sicario soundtrack she scored the music for its sequel Day of the Soldado. Further, she worked with Ryuichi Sakamoto as a cellist on the soundtrack of Alejandro Innaritu's The Revenant.

This year she composed the haunting soundtrack for the HBO's Chernobyl series that recreated the events of the 1986 nuclear power plant disaster. She composed much of the music from the sounds that were recorded in an actual decommissioned nuclear plant where the series were recorded. The success of the series and the soundtrack won her an Emmy for "outstanding music composition." Further, in July this year, Gudnadottir was also made a member of the Academy of Motion Picture Arts and Sciences. She also wrote the music for the Joker starting Joaqin Phoenix which was premiered in at the Venice Film festival where the film won the Golden Lion for the best movie. I spoke to Gudnadottir about her soundtrack work and the people she has worked including her experiences in the cinema realm.

All About Jazz: What are the elements that you bring into your work as a composer as your music doesn't have a strict sense of a genre? It seems as if it belongs to a genre of its own.

Hildur Gudnadottir: Thank you. I try to think as little as possible about genres when I write music so I try to use curiosity as my main tool as a composer. So I try to approach every project, every piece with as little pre-deciding as possible so I try to learn something or I'm experimenting with something for every project. I guess maybe this is why it cannot be easily put in a strict genre.

AAJ: What are the benefits of having a classical music background in what you do?

HG: That has many different effects. As a composer when you are writing for other people it is good to have some knowledge on how to play an instrument because you have to have a better sense of how to orchestrate. If you know how to play an instrument yourself you will understand what you can and what you cannot do. And I think it's very good to be practicing music every day and thinking about it all the time. When you start playing since a child, you train your mind and your body to performing music. It's a beautiful thing to have—the more you practice communication, the better you become at it. The more practice you have in every area of music the better you will feel when it comes to expressing yourself.

AAJ: How your work as a composer has led you to start working in film music?

HG: I've always been interested in storytelling. I love stories and I love reading, and I love telling stories especially with music. I feel much better when I express myself with music rather than with words. So telling stories with music is something I always love doing. I worked in the theatre before I started working with film music. I started working with film music around 15 years ago, off and on, but it's never really been an ambition of mine to work as a film composer. It's just that I spent more time working on films last year as I have a son and I couldn't tour that much. I couldn't play live that often. I was concentrating more on studio work and the film work kind of happened to me.

AAJ: Can you compare and contrast what it's like when you are writing music for yourself versus music for films?

HG: I think the difference is the level of communication and the level of outside dialogue that you have to have when you are working on film music because you aren't only telling the story from your point of view but you are working with a lot of other people who are also telling their opinion of what their take on the story is. So you have a dialogue with the director, the scriptwriter and other studio people. There are so many opinions involved that I have to listen to and work with. It's an interesting way of communicating as it often leads you to different places for example. There is a lot of voices as well, but when you are working by yourself and you are creating music just for the music's sake there is much more of an inner dialogue just between you and yourself. That is the biggest difference.

AAJ: Can you talk about the approach you took when you composed the music for the Chernobyl series? The series brought some childhood memories from the '80s about the disaster.

HG: It was very important to me since it was a real story and there were so many people involved and people had physical problems of what has happened. There are so many people involved and some of them are still alive and remember all of these events. It is an event that has had such a remarkable and noticeable effect everywhere you look really. I thought it was really important to approach it with as much respect as possible and as much honesty as possible and also not to dramatize that event unnecessarily. I didn't want to make people feel something that hasn't happened because what has already happened was horrible enough as it was. So I felt it would really be important to go there and to use real elements of sound material that can be found in this environment. I really tried to imagine how that fear actually felt like physically in reality instead of telling people: "ok, now you should see this since they are walking down a corridor." But the approach was how it feels to be stuck in a corridor of this size and length and what does claustrophobia feel like. What is this invisible terror in the form of radiation like? So these were real atmospheres with real structures and incorporate them into creating something like real fear and a real feel of how it feels to be there. That was important.

AAJ: How did you navigate yourself? How were you communicating with the director?

HG: I think the good thing, in this case, is that we were very much in line with how he wanted to tell the story and how he wanted me to approach that, the music and everything. So we had really lovely communication for this project and I was very lucky which is not always the case.

AAJ: The subject of the series is not just about the accident as such but the flaws it exposed in that system and society. It's a touchy subject and a very complex story rather than just an accident.

HG: Absolutely. There were so many things and so many aspects of what happened -the whole context, the human element, the people that were involved and their stories. The science of what happened.

AAJ: What was your relationship of friendship and work with the late composer Johann Johansson? You worked with him extensively in the past on several films firstly as a soloist and then as a co-writing partner. Can you talk about how you started working together?

HG: We got to know each other in Iceland about 20 years ago and we worked together on every single project that both of us did for about 16 years or so? We were very close collaborators and practically family. We had a strong and deep working relationship.

HG: We were very collaborative. It was always like a dialogue of trying things out and finding ways of expressing and recording and yes it was very much like a big dialogue.

AAJ: You play a very specific instrument -a prepared cello called omar. What makes it so special?

AAJ: Does it allow any room for improvisations?

HG: Yes, absolutely. It's a beast of its own.

AAJ: You worked with one of my favorite composers Ryuichi Sakamoto (and Alva Noto) on the Revenant soundtrack. What do you remember about working on those sessions as a soloist?

AAJ: What the future holds for you? What will come next for you regarding work?

AAJ: What sort of direction can you reveal that you took on the soundtrack for the Joker? This is such a lucid character that was played by brilliant and colorful actors and now Joaquin Phoenix has a take on it.

HG: I think the approach we took was a little stronger than the previous versions of the Joker. The idea was to honor those but also not to let those dictate the new film. The story that was told in our version of the Joker is the origin story which is actually a story that has never been told in a movie and there has never been an official story. So we kind of had a little carte blanche. There is no original origin as such so for the music I came in very early so I had an insight into the script and I started writing the music before they started shooting. The music had to be adjusted to the film's pacing and whole tone and performances in the film, as they used the music while they were filming as well. It's a bit of a different approach when you writing for fictional characters, you have a bit of more space to also write fictional music. In that sense this is more of a traditional score. It was really a lovely project to work on and I'm really happy with this collaboration. 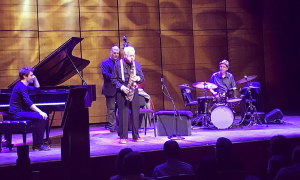