By DAN MCCLENAGHAN
July 7, 2017
Sign in to view read count 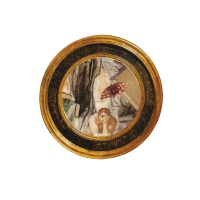 Pianist Craig Taborn—who seems an artist unconcerned with striking a commercial chord—climbed into a higher profile with three terrific releases on ECM Records: Avenging Angel (2011); Chants (2013); and Daylight Ghosts (2017). Beyond those, his discography as a leader is slim—as opposed to his prodigious sideman contributions. He and his artistry have been described as "elusive." Go ahead and try to find the category for him. And if ECM Records has a place for his wide-ranging vision, so does John Zorn, on his Tzadik label, with a 2016 release Flaga: Book Of Angels, Volume 27, a piano trio offering---one of the year's best—of Zorn's Masada Songbook tunes; and now Highsmith, a duet outing teaming Taborn with electronics wizard/laptop-ist Ikue Mori.

The addition of electronics to jazz/improvised music is usually more subtle than this, more an adding of tweakings and textures and background tapestries. On this improvised, in-the-moment set, Mori and Taborn are equal partners on a percussion fest packed with Mori's otherworldly sounds, reactive and proactive. A "Space Age" feeling pervades. Taborn's dynamics—from steroidal muscularity to the most subtle of twinklings—mesh in an inspired precision with Mori's delicate twitters; or they engage in fiery conversations, Taborn punching back against Mori's solar flare explosions; or they slip into gentle reveries with her eerie, luminescent backdrops. Or they fight like rioting rats, robotic versus organic ("Dangerous Hobby").

Taborn, in addition to his status as a top tier jazz pianist, is one of the more dynamic employers of electronics in his music. Highsmith, his highly successful engagement with Ikue Mori, takes the electro/acoustic marriage deeper, crafting a unique improvised sound.

The Still Point Of The Turning World; Music To Die By; Two Disagreeable Pigeons; Nothing That Meets The Eye; Variations On A Game; Quiet Night; A Bird in Hand; Dangerous Hobby; Things Had Gone Badly; Mermaids On The Golf Course; Trouble With The World.