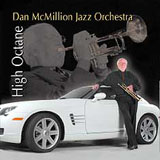 The title of the album could not be more apropos, for the music thunders throughout the entire session. The seventeen-piece Dan McMillion Jazz Orchestra opens up with a burner on Glenn Kostur's fast moving "Get It To Go, serving notice that you're in for one swinging ride. The second track—a Maynard Ferguson composition showcasing the leader on "Latino Love Walk —comes across like a sensational Spanish Bolero. Also featuring Tom Dietz on a fine alto solo, it is perhaps the best cut here.

The band swings on in a powerful rendition of Billy Strayhorn's "Take The 'A' Train, with McMillion's loud trumpet and a tasteful trombone journey from Keith Oshiro. It only gets better on "Another Star, highlighting the drumming talents of Glen Bush in combination with a fine soprano solo from David Moss.

The orchestra's rendition of Miles Davis' "Four is a terrific big band arrangement from Keith Bishop, where the music swings and rattles your cage as saxophonist Moss delivers one of the best tenor solos on the album. The classic Dizzy Gillespie chart "A Night In Tunisia sizzles and gyrates, with salvos from several band members following the leader's high-pitched blowing.

"Hey There is, finally, one of the softer and subdued scores here with plenty of sharp horn play from McMillion, who dominates the entire track. The album finishes with trombonist Steve Wiest's "South 21st Street Shuffle, featuring the burly baritone play of Dalton Hagler in a finale where the group succeeds in making one last statement exclaiming that what you just heard is, indeed, High Octane.

This is one thriller of an album containing swing, swagger and plenty of heat. A piece of advice, turn down the volume as you listen to this recording or the Dan McMillion Jazz Orchestra will definitely blow you away with its performance.

Get It To Go; Latino Love Walk; Dancing Nightly; Danny Boy; Take The "A" Train; Another Star; Four; Don't Let The Sun Go Down On Me; A Night In Tunisia; Hey There; South 21st Street Shuffle.