The Blues of Clarence "Gatemouth" Brown 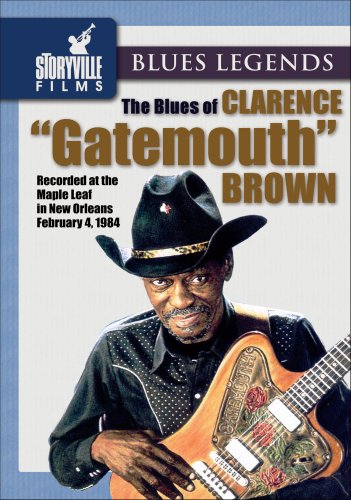 What a DVD of a 1984 Clarence "Gatemouth Brown concert proves is how timeless, ageless, and transcendent both this artist and his craft are. Brown's final recordings, mere months before his death from lung cancer in September 2005, sound no less fresh, vital, and beyond categorization than the music of this performance of more than twenty years ago.

Tempted at first to discuss The Blues of Clarence "Gatemouth" Brown as the archival footage of an American music master plying his trade at the peak of his powers, I must first point out that Brown himself was an archive. The multi-instrumentalist shuddered when called a "blues musician. Indeed, Brown played the blues, but for anyone else to reduce him to such a simple description would be tantamount to describing Sir Isaac Newton as a math teacher.

The Blues of Clarence "Gatemouth" Brown was recorded February 4, 1984 at The Maple Leaf in New Orleans. Brown fronts a big band typical, for him, of this career stage. Occurring between 1981's Alright Again and 1987's Real Life, Brown's New Orleans concert extended the language of those two releases with his fearless ambition to play in any damn style he pleased. The concert opens with the upbeat boogie "I Feel Alright Again, immediately putting on the brakes for the R&B "I Wonder. He follows that with what Brown calls "one of his jazz tunes —"Gate Walks the Board. This is prime Gate playing jump blues that are a stylistic collision of the Basie Band with T-Bone Walker.

The filmed concert amply illustrates Brown's unusual guitar playing style, one that can only be compared to Ty Cobb's crazy bat grip. Brown strums with his thumb but plays single notes with his right-hand index and middle fingers. Technically, this solution never made him as fast a guitarist as he could have been, but he was still pretty fast and dropped very few notes. Enough of that technical stuff—this is shit-kicking music, and just when the viewer thinks Brown is finished traversing the American musical landscape, he picks up his violin and plays a bit of Zydeco-inflected country on "Sunrise Cajun Style. Next Gate tears the blues up on "One More Mile and his own "Pressure Cooker, both very much in the Basie style. Albert Collins' "Frosty" is no less a blues treat for being less heated.

Gate closes the disc with a white hot "Up Jumped the Devil —so genuine the listener can smell the horse manure and beer while Gate steps on the gas and pushes the tempo to whiplash speed, ending the performance on the only note Clarence "Gatemouth Brown knew how to go out on...a happy one.

Visit Clarence Brown at All About Jazz.