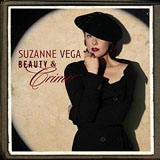 Once the public face of a largely over-hyped folk music resurgence in the mid-eighties, Suzanne Vega has remained remarkably consistent. Early in her career, popular successes such as the hits "Luca" and "Tom's Diner, while padding the artist's purse, have unfortunately overshadowed her accomplishments as a songwriter. Over the years, she would embrace and discard a variety of production approaches, most notably with ex-husband Mitchell Froom in the mid-nineties, but no matter what the setting, Vega has proven to possess an undeniable tenacity and singularity of vision.

Songs in Red & Gray (A&M, 2001) contained her most venomous lyrics of broken relationships and personal loss, appropriately matched by Rupert Hine's icy production that made the subject matter particularly fascinating. Her seventh album, Beauty & Crime, stands in noticeable contrast to the thinly veiled vitriol of that album, revealing a songwriter and performer in a much more comfortable, if somewhat less compelling space.

However, this collection of songs does have a certain allure. Producer Jimmy Hogarth has wisely brought Vega's voice up front again, and focuses the listener's attention on the stories she tells. The light bossa of "Pornographer's Dream" underscores a lyric with a sinister edge, and both elements work well together to create a sonority that is both luxuriant and disquieting.. "As You Are Now" sets a familiar tone for those familiar with her work, with scampering acoustic guitar, a lush but unobtrusive string arrangement and Vega's distant but inviting voice that articulates a compassionate and well-woven lyric.

Tracks like "New York is a Woman," "Frank and Ava," and "Ludlow Street" mark a welcome return to songs about the city that was once so central to her work in the early days. Overall, Vega has cultivated an aesthetic that is less cagey and more vulnerable and honest, and that gradual shift has made her music more personal and accessible.

Suzanne Vega has proven herself to be a capable songwriter whose work has remained consistent without conveying a sense of a recycling of ideas. Her gifts as a lyricist have distinguished her work from that of her contemporaries, and that facility for storytelling has always been the ace up the songwriter's sleeve. She has always surrounded herself with the best musicians and producers, and has created music with intelligence, fragile beauty and austerity. Beauty & Crime contains all of those elements, and while the results aren't particularly surprising or revelatory, the craft evident in these tracks make it difficult to deny this creative artist her due.