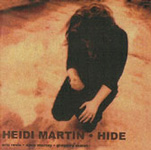 Vocalist and composer Heidi Martin was born in Washington, DC and reared in Maryland, singing in church. In high school, she sang backup for professional artists including Bill Danoff of Starland Vocalband. Jazz became her monkey after hearing Shirley Horn in New York City.

Martin pursued Jazz Studies at the University of the District of Columbia, where she became an student of the local music scene, spending Monday nights at the One Step Down Club watching regulars Reuben Brown and Steve Novasel. Prior to moving to New York City full time, Martin became the protégé of legendary drummer/vocalist Grady Tate, flourishing from his musical direction.

Fully prepared, Heidi Martin emerges with her recording, Hide—very much with the the South in her mouth. It's primarily a lyrics-oriented recording, employing the sparest (and most tasteful) accompaniment as a vehicle for her words and images. Lyrically, Hide is a humidly anxious recording peppered with piquant, frank sensual/sexual/spiritual imagery. Take for instance the opening track:

Black Gandhi come up from the South / Put music in my mouth / From your drumming language out in Georgia / Alabama bred cookin' years instead of speakin' out / what would not allow / said can we, can we hear Congo Square / in the eye, will the circle be unbroken / pieces of the sky / let guide you up / make me feel like...

The instrumentation is sparse, permeated by electric piano, organ, and harmonica (more Toots Thielemans or Stevie Wonder than Walter Jacobs or Rice Miller), a breezy stroll through the Civil Rights movement at a level deeper than the mere political. Martin has a vision—oneness with all—and she promotes it with her lyrics. She cuts to the chase with little conversation, more Hemingway than Faulkner. But there's stll a distinct Southern vernacular in her words.

Wine is a mixture of spirits that stimulate the senses of sight, smell, and taste. The voice is a similar mixture of spirits—a fermentation of styles, shapes, and sounds. From the female perspective, Heidi Martin's voice has a heavy Rickie Lee Jones bottom with a suggestion of Joni Mitchell and Betty Carter and just a hint of Janis Joplin in the finish. From the male perspective, John Hiatt provides the tobacco, Ray Charles the mossy expanse, and Isaac Hayes the vinegar. The bouquet is distinctly Southern, and it deepens with subsequent listenings.

Hide is a biopic of the 21st Century American South: the sticky sensuality and dusty prejudice that endures, never changing. Musically, Hide is the same, but sparingly so, Muscle Shoals and Memphis distilled to the pure essence. The instrumentation and musical arrangements are like the drop of water added to the sacramental chalice, the vehicle for the lyrics to manifest in the aural sea of forgiveness. Hide is a demanding, inventive recording that pays the listener dividends in thoughtful consideration and insight.

Hide is available from Heidi Martin on the web.

Black Gandhi; Ism; Memphis; Workin' Harder; Rice; Why Do I ? (Hide); Peaceful; Trading Glances; Your Life; Wanna Be; Mayflower; I Wanna Comfort You; My Father Left Us For The Moon.