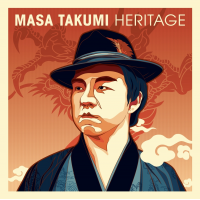 An amazing blend of modern orchestration and arrangement strategies with ancient Japanese Court sounds, instruments and vocals from previous centuries, a sound and rhythm resonant with multi-textured compositions that are friendly to the fingertips all the way to the toes for the beat, as well as to the ear for the groove. A feeling that carries layered meanings, a sonic representation of some aspects of Japanese cultural iconography set to a modern funky groove for which multi-instrumentalist Masa Takumi has become well known. Notably, he received GRAMMY® nominations for his work with reggae legends Sly & Robbie in 2014, playing guitar and keyboards on the album Reggae Connection, and then on Reggae Power in 2015. Masa has also done soundtrack work for Japanese animation titles such as "Claymore" (2007), "Witchblade" (2006), "Peach Girl" (2005), and "Genshiken" (2004). Takumi has recently found a new home with the Domo Music Group, the label known for the esteemed Kitaro. Domo is submitting Heritage for Grammy consideration in the Contemporary Instrumental category.

On Takumi's 2016 solo debut Stars Falling, he composed and performed all the instruments, a sparkling orchestral dreamscape. This was followed in 2017 by the album Deep Down, which won both Akademia Music Awards and Global Music Awards. His artistic music video for Deep Down achieved a nomination at the 2018 Hollywood Music In Media Awards. Takumi is also an accomplished magician and a member of the world-famous Magic Castle, an exclusive, private club in Hollywood, California.

The title track, "Heritage" (3:30), opens with a bouncing boogie done in a gakaku style, which soon breaks into an icy cold bridge, then takes it back to the bounce. Decorated with traditional spooky instrument sounds, there is that funky beat. Dig the thematic transformation, with lots of popping around old school imperial court music mixing with the drums and the piano, one can feel his music bringing the past to life in a symphonic way.

"Sakura River" (3:36) is a refreshing slow meditation on cherry blossoms shimmering on the peaceful water. During the piano solo one might think of a haiku poem describing both arboreal and human "blossoms." The joyful tradition of hanami (flower viewing) is an old and ongoing tradition, a reverential, sacred respect bringing to mind both clouds and cloud-like profusions of springtime sakura blossoms, on a glorious spring day, with watery reflections, to remind us how the world should be. World peace is the basic message.

To close, the album returns to the stately imperial sound drifting on a bed of piano poetry. "Midwater Night's Neo Dream" (3:34), bringing back the full blended orchestra with Kabuki shadows and flowing grooves, long, sustained, and very slow in feeling but lifted into heavenly dance; the effect is complex and haunting.

I lived in Olympia, Washington between 1977 and 1985 where I learned to speak jazz.