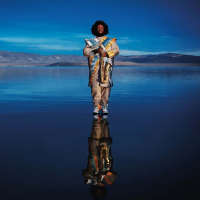 Taking inspiration from his 2017 release Harmony Of Difference, Kamasi Washington has once again employed the use of strings and choir on this gargantuan release. The sonic augmentation has the effect of rendering many of the tracks like a cross between John Coltrane and Carl Orff or perhaps Sun Ra and Sir Karl Jenkins.

Granted there's been a terrific amount of hype surrounding Heaven And Earth but there is justification for this inasmuch as the whole work delivers a staggeringly impressive payload, qualitatively as well as quantitatively. Sure, there's the schtick of the "hidden" third disc on the tri-sided gatefold CD release, which requires a sharp knife to carefully release it from its sealed cardboard pocket. But the extra, third CD (The Choice), isn't merely a gimmick; the exquisite rendition of Goffin and King's "Will You (Still) Love Me Tomorrow," sung by Patrice Quinn, attests to this fact.

On CD 2 (Earth), "Will You Sing" provides a near-perfect fusion of choir and a swing-based rhythm. Whilst it's true that Washington is not quite Coltrane (a fatuous comparison, bordering on the heretical) he gets full marks for his sheer openness and lack of guile. Washington's often fiery tenor solos do, at times, bear some similarity to Coltrane's, circa A Love Supreme and beyond, as heard on "Ooh Child." He gives the distinct impression that he really means what he plays and plays that with unbridled verve. "Song For The Fallen" and the freewheeling "The Psalmist" are great examples of his articulate tenor playing.

The big band arrangements are superb too, and whilst the addition of strings might pose an argument that the music is over-glutinous, this is not the case, because this amalgamation works extremely well. Obviously the comparison with Sun Ra is irresistible because of track names such as "Agents Of Multiverse" and "The Space Travelers Lullaby," but the truth is the pieces are more grounded than might be supposed. The marriage of funk and orchestra and choir on say, the foot-tapping "Fists Of Fury," an overt paean to Bruce Lee, engages cerebrally and viscerally and the voices perfectly complement the solos.

There are references to other jazz greats too, obviously with a joyous version of Freddie Hubbard's "Hub Tones," Dontae Winslow spectacularly taking Hubbard's soaring trumpet role, and there's a more subtle allusion to Herbie Hancock's Headhunters on the growling wah-wah bass start to "Street Fighter Mas." Heaven And Earth is a superlative work and undoubtedly Washington's magnum opus to date. Just forget the hype, this truly is the jazz album of the year.

CD 1 (Earth): Fists Of Fury; Can You Hear Him; Hub-Tones; Connections; Tiffakonkae; The Invincible Youth; Testify; One of One. CD 2 (Heaven): The Space Travelers Lullaby; Vi Lua Vi Sol; Street Fighter Mas; Song For The Fallen; Journey; The Psalmnist; Show Us The Way; Will You Sing. CD 3 (The Choice) The Secret Of Jinsinson; Will You Love Me Tomorrow; My Family; Agents Of Multiverse; Ooh Child.