By JEFF DAYTON-JOHNSON
July 1, 2010
Sign in to view read count 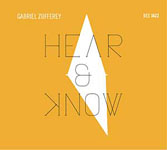 This satisfying, varied and coherent date sounds like the work of a mature group leader, but in fact it is only the second release from twenty-something Swiss pianist Gabriel Zufferey. His first, Après l'orage, a trio outing with heavyweight French drummer Daniel Humair and bassist Sébastien Boisseau, came out on Bee Jazz in 2005 to very good notices in Europe. Hear & Know was recorded live before a small and good-natured audience; the concert setting lends a freshness to the performance, but there is nothing loose or sloppy about the group's focused interplay.

Perhaps because drummer Ramon Lopez's taut, insistent pulse causes the band to sound a little like the E.S.P. (CBS, 1965)-era rhythm section of Miles Davis which featured Tony Williams, Zufferey himself invites comparisons with that legendary rhythm section's pianist, Herbie Hancock. (Lopez is a particularly experienced sideman—he's a member of Joachim Kuhn's current trio—and sometime group leader in his own right.) Zufferey is not an especially Hancock-like soloist, but he does have something of the older pianist's vast musical intelligence and deliberate judgment.

Some of the tracks feature the leader on electric piano, including a mildly twisted take on Thelonious Monk's canonical "'Round Midnight," where the piano is abrasively distorted, more or less in keeping with Samuel Blaser's aggressive trombone playing. Monk makes a reprise near the close of the set, again helped generously by the trombonist's aggression: a Zufferey original, "Au bas, ma baraque," evolves into a fierce, thudding unison beat, over which it seems almost accidentally to occur to Blaser to start playing a particularly gutbucket rendition of Monk's "Blue Monk." He's subsequently joined, riotously, by the other players.

In between the two appearances by Monk, Zufferey's band traverses a set of elliptical original compositions. "HeaR(E) & kNOW" is perhaps the most quizzical, and "Ballade en cet" features probably Zufferey's loveliest solo. (Zufferey's titles are typographically elaborate, puns and coded messages, not all of which are readily deciphered. " kirE eitaS," of course, is "Erik Satie" spelled backwards, but it is not immediately clear whether the number's pretty theme, suitably Satie-like, is a Satie composition played backwards.)

Zufferey emerges as a relatively conservative soloist thrust into a somewhat adventurous setting. That he has placed himself in the company of musicians less conservative than he, and playing material that similarly calls upon him to stretch himself a bit, only demonstrates his good judgment. All the more so, given that he wrote most of the material; that is, he's a more radical composer than player. Let there be no misunderstanding: this is straight-ahead jazz that will appeal to a wide swath of the jazz audience. What is more or less radical, however, is the degree to which Zufferey is pushed—or pushes himself—to broaden his harmonic and rhythmic thinking. It's a creative tension that yields rewarding results.